Through the Juntos Sumemos campaign they look forward to strengthen the Paraguayan sanitary system to the fight against Covid-19 in Paraguay.

Paulo Sergio Sarabia of Sarabia Group, within the “Juntos Sumemos” campaign framework, donated 5.000 liters of hand sanitizer to the Tenth Sanitary Region of the Ministry of Public Health and Social Welfare (MSPyBS) in order to contribute with the sanitary system of Alto Paraná. Alongside, the distribution of food kits took place in many cities of the country.

Sarabia Group’s directive, Paulo Sergio Sarabia announced that within the few next weeks donations will be given to all the districts where the business group has a presence. “The campaign has a national level range in the departments in which we have a business presence. United, at work, the solidarity and the commitment with the people, we’re stronger and we will be able to move forward together gracefully from this battle” he pointed out.

The donation was received by the director of the departmental unit, Dr. Hugo Kunzle with whom the signing of the document was done and he highlighted the business group’s social commitment with the community. “The company itself is producing the hand sanitizer that they are donating and that shows their commitment, for which we are very grateful. This donation will be distributed to the health center of the entire department” Kunzle pointed out.

Kunzle also added that the received donations will be used in the areas of health and safety. “Today we are receiving hand sanitizer, and in a previous delivery done by the Sarabia Group we received biosafety equipment”, he concluded. “I’m very grateful, on behalf of all the health workers and also on behalf of the population for the support we’ve been permanently receiving from the companies of the Sarabia Group. This comforts for the daily work we’ve been performing” he added.

During the act, Paulo Sergio Sarabia, recalled that previously, the Sarabia Group already donated 7.000 safety equipment to the Tenth Sanitary Region; 1.000 liters of hand sanitizer to the Thirteenth Sanitary Region of Amambay and another 1.000 liters of hand sanitizer to the District Hospital of Villeta, Central department. Also, Paulo Sergio Sarabia pointed out that the “Juntos Sumemos” campaign came up from the merger of Social Responsibility plans from the companies Tecnomyl and Agrofertil, in order to present a unified Contention Plan concerning the Sanitary Emergency for Covid-19.

During the act, on behalf of the National Government, the Sarabia Group received a recognition for their given contributions since the pandemic started.

Simultaneously the Sarabia Group provided 514 food kits to families in vulnerable situation in Villeta, Central department. And it’s projected that within the week the provision of kits will continue in several departments of the country. During the day, collaborators from the business group provided the donations in Villeta’s communities such as: Don Bosco, San Expedito, 8 de diciembre, 19 de marzo, San Blas and Las Leñas.

Sarabia Group’s directive, Paulo Segio Sarabia, indicated that the food kits will arrive to 25 cities across the country, covering departments such as Central, San Pedro, Canindeyu, Amambay and Alto Parana. He detailed that the business group is deploying all of its infrastructure to reach out to the most vulnerable people from the communities where they commercially operate.

The Sarabia Group is an Agribusiness leader in Paraguay in terms of production and commercialization of agro-chemicals and grains stockpiling throughout its companies Tecnomyl and Agrofertil. Its directives José Marcos Sarabia, Paulo Sergio Sarabia and Antonio Ivar Sarabia actively participate of the Corporate Social Responsibility actions, encouraging activities in support of the most vulnerable areas and the environmental care. 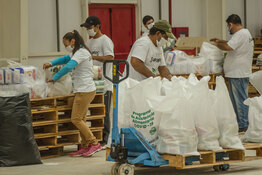 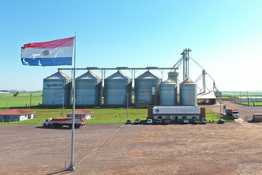