Will Manganese X Energy be a “Miner for ELECTRIC GOLD?” Read this article by the Battery Hill experts from NB, Canada.

Why is Elon Musk moving away from Cobalt?

According to media reports, "It's rare (i.e., expensive), hard to mine and often mined unethically, so it makes sense that Tesla is looking to eliminate Cobalt from its batteries. Tesla already uses far less than many competitors, but Musk says Tesla will now stop using Cobalt all together." (themanufacturer.com).

"Elon Musk, Tesla visionary, has indicated it will need 33% Manganese (Mn) in their battery.”

“We have 30 million estimated tons of Manganese. The Battery Hill project is located in central New Brunswick and is strategically situated 12 kilometers from the US (Maine) border, near existing power transmission lines, with railway and road access that provide suitable transport to major shipping lanes on the Atlantic Ocean and Saint Lawrence Seaway. We have achieved a milestone and major Quebec Corporations related to the EV battery space have complimented Manganese X Energy on this milestone. They are very impressed that we have achieved MnSO4 99.95% sulphate purity, EV compliant as a precursor to the cathode. The precursor can then be developed for additional products such as electrolytic manganese dioxide (EMD), electrolytic manganese metal (EMM) and electrolytic manganese capacitor (EMC). Because of our mine location, we have everything inplace to become an important North American supplier for battery-grade MnSO4. Elon Musk has come to realize that Manganese is ELECTRIC GOLD."—Martin Kepman, CEO at Manganese X Energy.

According to the battery experts from Manganese X Energy

Cobalt is considered a conflict mineral, selling at $34,000 USD per ton.  Existing mines are in politically unstable countries like the Congo. There are human rights and child labor concerns, thus making a reliable supply chain difficult.  Manganese (Mn) is more robust and stable than Cobalt.  Battery experts agree that a shift to more ethical and cheaper battery chemistry that supplants Cobalt with Manganese for the cathode is the way to go.

Battery experts and miners will see this as a very positive announcement for the electric vehicle (EV) market as well as for the backup storage industry. Tesla’s vision to make a cheaper version of the Tesla car will add additional pressure on the car manufacturing industry to compete.

Manganese X Energy has worked on the project at the Battery Hill deposit in Woodstock, NB, for more than four years; all future mining will be for Manganese carbonate.  The majority of existing Manganese mines are known as oxide mines.  “Reduction roasting-acid leaching processes are utilized to process high-iron-content manganese oxide ore.” https://link.springer.com/article/10.1007/s11771-015-2780-7

These Manganese oxide ore mines are processed by roasting into oxides and then converted into sulphates.  Manganese carbonate is more easily processed than Manganese oxide because it utilizes a leaching process that converts it directly into MnSO4 (sulphate). Tesla has also acquired the rights to a lithium property in Nevada.

“In virtue of all these above mentioned developments, Manganese X Energy is a good choice for Tesla and other electric car manufacturers.” Martin Kepman CEO.

After reviewing our own data and independent geological assessments that were performed, Manganese X Energy expects to be able to supply 20,000 tons per year for EV car manufacturers looking for Nickel Manganese batteries.  These studies have confirmed and validated the quality and estimated tonnage of Manganese that could be extracted from the Battery Hill property in Woodstock, New Brunswick, Ca.

There are other mines in Europe and British Columbia (BC) that Tesla or other EV car companies could use, but none that virtually border Canada and the US.  It is also accepted knowledge that Quebec wants to make a major investment in the lithium battery industry; hence, Battery Hill, New Brunswick, is easily positioned to become a source for Quebec.  Furthermore, the mainstream adoption of Manganese in the EV battery chemistry sector will have other EV manufacturers knocking at the door of Manganese X Energy.

In addition to lithium battery utilization in electric cars, there is a growing demand for commercial, industrial, and high-density residential.  Jason Croy, an independent battery expert and physicist in Argonne’s Chemical Sciences and Engineering division states: “The demand for energy storage is too great for one technology to fulfill it, so we’re looking for environmentally friendly, safe, and inexpensive alternatives ... Manganese is a good option for that.”

“Elon Musk indicated the future requirements of Manganese for Tesla by revamping the battery chemistry of the cathode to being 1/3 manganese and 2/3 nickel.  Our Battery Hill Manganese property has the potential to help satisfy Tesla’s needs.  We’re excited to be commencing our drill program as previously announced (news release dated September 15, 2020) later this week.  Upon completion of the program, work will be initiated for the planned preliminary economic assessment (PEA) study for the project.”

About the Battery Hill Project 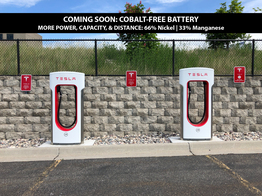