Fed attacks US inflation with another interest rate hike

The US Federal Reserve on Wednesday again raised the benchmark interest rate by three-quarters of a percentage point in its ongoing battle to tamp down raging price pressures that are squeezing American families.. In a vote that was unanimous -- unlike the decision made in June -- the Fed's policy-setting Federal Open Market Committee (FOMC) raised its benchmark lending rate to a range of 2.25 to 2.5 percent, after starting the year near zero.

The US Federal Reserve on Wednesday again raised the benchmark interest rate by three-quarters of a percentage point in its ongoing battle to tamp down raging price pressures that are squeezing American families.

It was the second straight 75 basis point increase, and the fourth rate hike this year, as US central bankers move aggressively to cool the strongest surge in inflation in more than four decades, without derailing the world's largest economy.

While the Fed noted signs that the US economy is slowing, it signaled plans to continue to increase borrowing costs -- and Fed Chair Jerome Powell made it clear an even bigger rate hike is possible.

"Inflation is much too high," Powell told reporters, saying the Fed will keep raising rates until there is solid evidence that inflation is moving back towards the two percent goal.

Another "unusually large increase could be appropriate" at the next meeting in September, Powell said, stressing that US central bankers "wouldn't hesitate to make a larger move than we did today" if justified.

President Joe Biden is facing political backlash for surging prices, which he has mainly blamed on the Russian invasion of Ukraine that sent global food and energy prices soaring.

In a vote that was unanimous -- unlike the decision made in June -- the Fed's policy-setting Federal Open Market Committee (FOMC) raised its benchmark lending rate to a range of 2.25 to 2.5 percent, after starting the year near zero.

Economists say this has been the most aggressive Fed tightening cycle since the 1980s, when stagflation -- a wage-price spiral and stagnant growth -- crippled the US economy. But the Fed chief acknowledged that at some point, policymakers will be able to slow the pace of rate hikes.

Wall Street seemed cheered by Powell's comments, with solid gains in all three major stock indices, including the blue-chip Dow, which ended with an increase of more than 430 points. 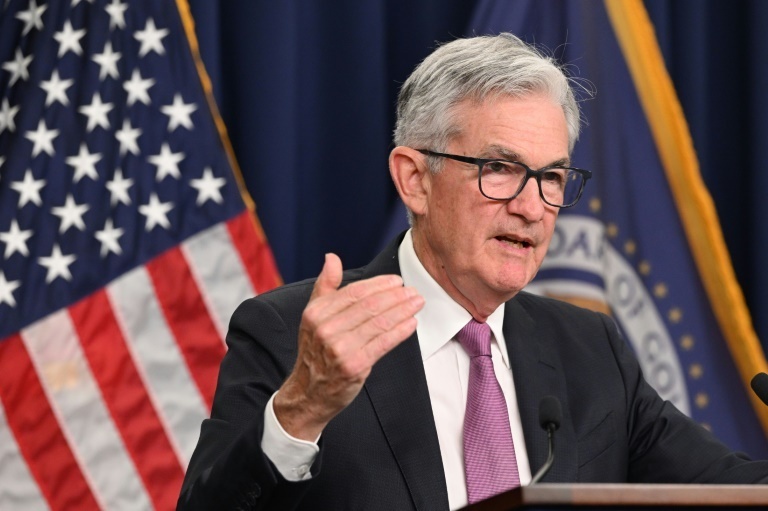 The challenge for policymakers is to quell inflation before it becomes dangerously entrenched -- and without sending the world's largest economy into a recession that would reverberate around the globe.

Powell has made it clear they are willing to risk a downturn.

But on Wednesday, he expressed confidence that the United States can avoid that fate, and the Fed can engineer a "soft landing," taming inflation without causing a recession.

"We're trying to do just the right amount. We're not trying to have a recession and we don't think we have to," Powell said. 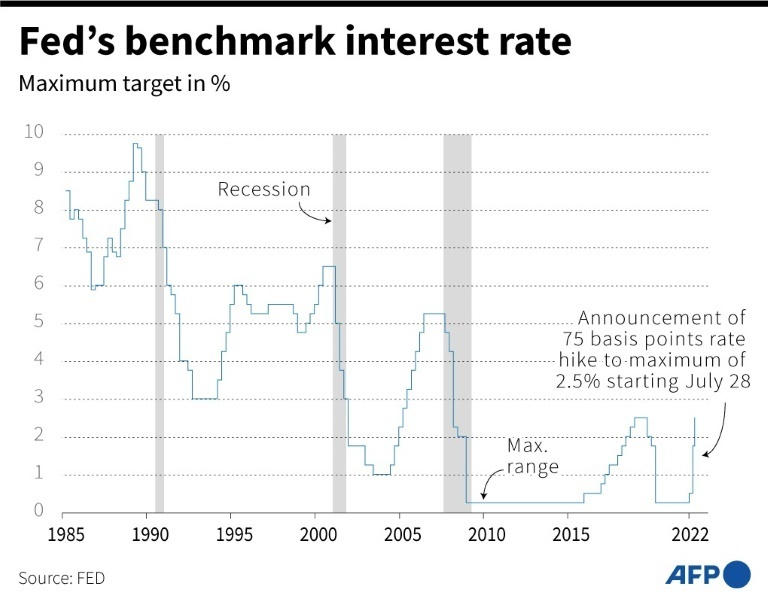 The Fed chair nevertheless acknowledged that the path to thread that needle "has narrowed."

With government data on second quarter GDP due out Thursday, there is intense focus on whether another negative reading will mean the economy is in recession.

The economy contracted 1.6 percent in the January-March period, and though the consensus forecast calls for modest growth in the latest three months, many economists expect a downturn.

Two consecutive quarters of negative growth are generally considered a sign the economy is in recession, although that is not the official criteria.

But Powell said he does not think the country is currently in a recession because "there are too many areas of the economy that are performing too well."

While "it's necessary to have growth slow down... We think that there's a path for us to be able to bring inflation down while sustaining a strong labor market."

US prices have continued to rise, and he lamented the hardships faced by families whose paychecks don't stretch as far at the grocery store.

But the pace seems to be slowing and gasoline prices at the pump have fallen more than 70 cents from the record of just over $5 a gallon in mid-June.

Meanwhile, rising mortgage rates have slowed housing sales for five straight months, and the FOMC statement noted that "recent indicators of spending and production have softened."

Policymakers seemed to acknowledge that some factors are beyond their control.

"Russia's war against Ukraine is causing tremendous human and economic hardship. The war and related events are creating additional upward pressure on inflation and are weighing on global economic activity," the FOMC statement said.

Nancy Vanden Houten of Oxford Economics still expects another three-quarter-point rate hike at the next policy meeting, but after that, she says, "we look for the Fed to downshift to a slower pace of 25bp rate hikes."

Other economists are now calling for a smaller, half-point increase.

The Fed will see two more key monthly data releases by then, on employment and consumer prices. Will take 'a few years' to get US inflation back to 2%: Fed official

Markets looking for clarity but tuning out Fed message

Fed says more US rate hikes coming, pace will slow 'at some point'