Ethiopia's return to conflict: what we know

Fresh fighting between Ethiopian forces and Tigrayan rebels has broken a five-month truce that had paved the way for the resumption of humanitarian aid and tentative peace efforts.. - Prior to the truce, no aid had reached Tigray by road for three months, leaving the region of six million in desperate need of food.

Fresh fighting between Ethiopian forces and Tigrayan rebels has broken a five-month truce that had paved the way for the resumption of humanitarian aid and tentative peace efforts.

The facts behind the sudden return to conflict in northern Ethiopia remain sparse. Here's what we know so far and the questions that still linger:

As has been the case throughout the 21-month conflict, both sides have accused each other of starting the fight and violating the truce that had been in place since late March.

The Tigray People's Liberation Front (TPLF) said government forces and their allies launched a "large-scale" offensive towards southern Tigray at 5 am (0200 GMT) on Wednesday.

But Prime Minister Abiy Ahmed's government said it was the rebels who struck first.

The tit-for-tat claims could not be independently verified as access to northern Ethiopia is severely restricted.

Later in the day, Ethiopia's air force announced it had downed a plane carrying weapons for the TPLF that had entered its airspace via Sudan, a claim the rebels dismissed as a "blatant lie".

- What does this mean for peace efforts? -

Regardless of who initiated Wednesday's clashes, the prospects for peace in Africa's second most populous nation appear grim, analysts say.

Even before the latest eruption of violence, the two sides were already at odds over the question of who should mediate potential negotiations.

The Abiy government wants the African Union's Horn of Africa envoy Olusegun Obasanjo to lead peace talks while the TPLF has been pushing for Kenya's outgoing President Uhuru Kenyatta to broker dialogue.

They have also sparred over the restoration of basic services such as electricity, communications and banking to Tigray -- a key precondition for dialogue according to the TPLF.

The government on the other hand says federal service providers cannot work inside Tigray without a "secure environment".

The Eurasia Group political risk consultancy flagged "the pre-emptive recruitment and training of troops by both camps" -- an indication that neither side had put much stock in peace negotiations.

"Amid a resurgence in fighting, neither party will be willing to reduce their leverage for future talks by compromising on key issues," said Eurasia's Africa analyst Connor Vasey.

"Rather, they will likely aim to use the next phase of fighting to bolster their negotiating positions," he said, setting the stage for an escalation in violence.

- How will humanitarian aid be affected? -

Prior to the truce, no aid had reached Tigray by road for three months, leaving the region of six million in desperate need of food.

Even after convoys resumed, fuel shortages have made it difficult for aid workers to distribute supplies. 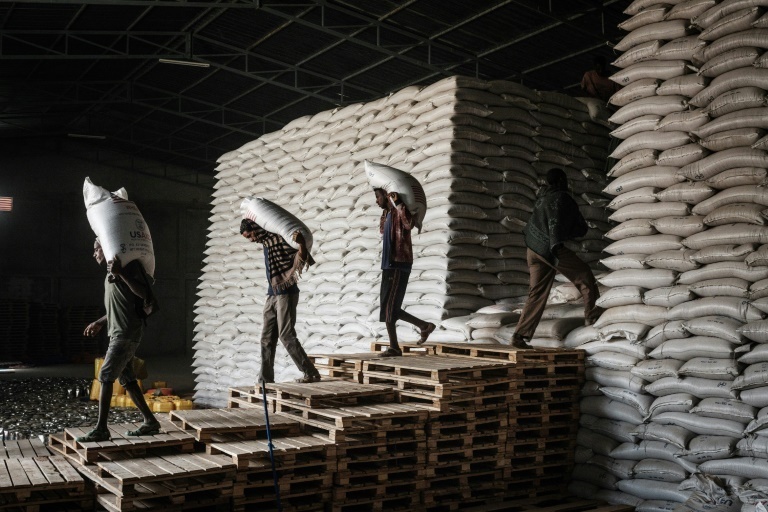 Last week, the UN's World Food Programme warned that nearly half the population in Tigray was suffering from a severe lack of food and rates of malnutrition had "skyrocketed".

The return to conflict will worsen an already dire situation.

On Wednesday, the UN said the rebels had "forcibly entered" a WFP warehouse in Tigray's capital Mekele that morning and taken a dozen tankers carrying 570,000 litres of fuel intended for emergency relief operations.

"Millions will starve if we do not have fuel to deliver food. This is OUTRAGEOUS and DISGRACEFUL," WFP chief David Beasley said on Twitter.

In recent weeks, both warring parties appear to have simultaneously broached the possibility of peace while also making preparations for a potential return to conflict.

Whether the latest conflagration leads to all-out war will depend on which view prevails, with analysts urging the international community to play a more active role in bringing both players to the negotiating table.

In a statement dated August 23, TPLF leader Debretsion Gebremichael said the rebels had participated in "two rounds of confidential face-to-face" meetings with top Ethiopian officials, the first acknowledgement by either side of direct talks.

The government has not confirmed the existence of such talks, but last week an official committee tasked with looking into negotiations called for a formal ceasefire in a proposal it planned to submit to the AU.

The eruption of hostilities is "a deafening warning to the key international and regional actors that they must immediately ensure peace talks actually occur", said William Davison, senior Ethiopia analyst for the International Crisis Group think tank.

"They should accordingly instruct the belligerents to issue all of their demands when at the negotiating table, rather than making them preconditions for talks."

Diplomatic efforts in the past have run into trouble.

The TPLF has accused Obasanjo of being biased in favour of the government, and Addis Ababa in turn has chastised US and EU envoys for urging a resumption of basic services to Tigray, reflecting the scale of the challenge ahead. Cautious hope for Ethiopia deal to silence the guns