Cubans will vote on Sunday in a referendum on whether to allow same-sex marriage and surrogate pregnancies, which experts say could turn into an opportunity to voice opposition against the government.. Many could vote "No" or even abstain altogether as a way "to make the government pay for the crisis," Arturo Lopez-Levy, a Cuban academic at Holy Names University in California, told AFP. The referendum, he added, amounted to a unique "opportunity to show approval or disapproval" with the communist government.

Cubans will vote on Sunday in a referendum on whether to allow same-sex marriage and surrogate pregnancies, which experts say could turn into an opportunity to voice opposition against the government.

More than eight million Cubans aged over 16 are eligible to participate in the voluntary and secret ballot -- the first time a law will be decided by public vote.

Coming just months after the government passed a penal code slammed for rolling back freedom of expression, the family code would not only permit marriage and surrogacy (as long as no money is exchanged), but also adoption by same-sex couples and parental rights for non-biological mothers and fathers.

If the law is approved, Cuba would become only the ninth country in Latin America to allow same-sex marriage, following in the footsteps of Argentina, Brazil, Colombia, Ecuador, Costa Rica, Chile, Uruguay and some Mexican states.

The vote comes with Cuba mired in a deep economic crisis that is fueling mass immigration away from the island, with an increasingly vocal population expressing unhappiness with the one-party state.

As a result, Sunday's referendum on the government initiative may become a protest vote. 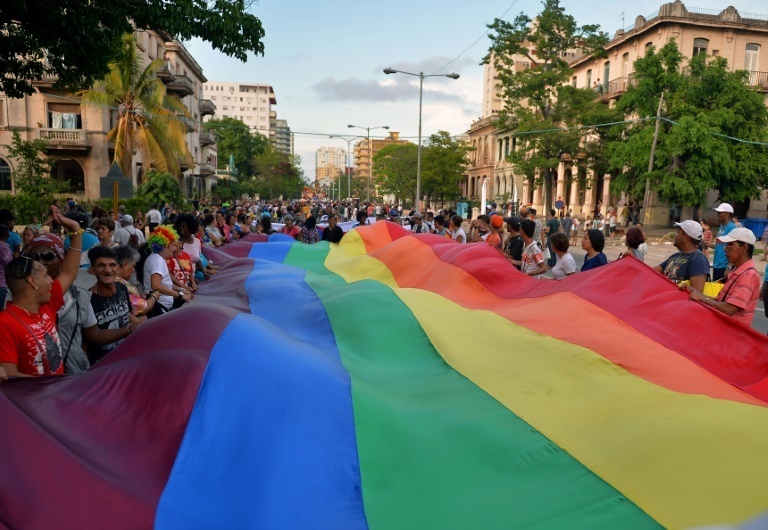 With Havana having carried out an intense campaign in favor of the measures, a vote against the items could provide Cubans with a rare opportunity to publicly rebuke their government.

Many could vote "No" or even abstain altogether as a way "to make the government pay for the crisis," Arturo Lopez-Levy, a Cuban academic at Holy Names University in California, told AFP.

The referendum, he added, amounted to a unique "opportunity to show approval or disapproval" with the communist government.

And while "No" is unlikely to win, it is expected to garner between 25 and 30 percent of votes, which would in itself be something of a rebuke to the government.

In 2019, the new constitution was also put to a referendum and approved with 78 percent of the vote, but that was already the lowest approval rate the government had received since the 1959 communist revolution.

Six decades after Fidel Castro's revolution, Cuba is experiencing its worst economic crisis in 30 years, fueled by ramped-up US sanctions and a tourism collapse due to the coronavirus pandemic.

Many Cubans are struggling to access medicine, electricity, fuel and basic foodstuffs amid critical import shortages and staggering inflation.

The country erupted in historic anti-government protests in July last year by citizens clamoring for food and greater freedoms.

Hundreds were detained and jailed, but this has not stopped repeated demonstrations in recent months in a country notoriously intolerant of dissent.

In May, the parliament unanimously approved a reform to Cuba's penal code, with strict limits on social media use opponents say was designed to quash future displays of public discontent.

The family code is meant to replace legislation from 1975 that defines marriage as a union between a man and a woman.

The government had sought to change this in the 2019 constitution, but withdrew its proposal amid strong opposition from churches and conservative groups.

It was worked instead into the family code, which President Miguel Diaz-Canel tweeted on Wednesday represents "the hope of thousands of people marked by painful stories of exclusion and silence."

Marginalization of LGBTQ people in traditionally macho Cuban society peaked in the 1960s and '70s.

In 2010, Castro admitted the Cuban revolution had oppressed members of the community as deviants, including with forced labor camps for re-education. Some were driven into exile.

A major opponent of the family code is Cuba's powerful Catholic Church, which maintains "it is a child's right to have a father and a mother."

The government beat the drum for its initiative during weeks of countrywide public consultations it said were attended by more than half of Cuba's 11.2 million people.

Other proposals in the code include clearly defining the rights of the elderly, and stipulating that no one found guilty of abusing minors can ever adopt a child.

The code requires more than 50 percent of votes to pass, and would enter into force the day after the results are known.

Even if there is a protest vote Sunday, or the draft is rejected on principle, some believe the outcome is already sewn up anyway, and the code will pass.

"It is already decided," said Martha Beatriz Roque, a long-term dissident who is convinced the government was merely paying lip service to "respecting the rights of people."