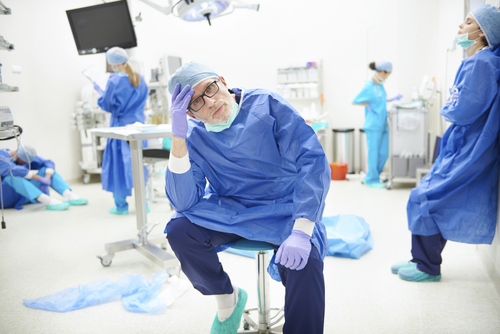 Brooklyn Medical Malpractice Lawyer Speaks on Are Doctors Getting Enough Sleep For Your Safety?

According to the Centers for Disease Control and Prevention (CDC), Americans are a sleep-deprived bunch. More than one-third of people in the United States don’t get enough sleep, which the CDC defines as seven or more hours per day for adults between the ages of 18 and 60.

Not getting adequate sleep can have serious consequences, including a higher likelihood of experiencing a work-related accident. When you work as a doctor, going without sleep can result in medical mistakes.

A report from The Atlantic describes one doctor’s near-fatal car crash after working 120-hour weeks on little sleep. As a neurosurgeon, he routinely worked on just a few hours of sleep each night. One morning as he was driving to work, he blacked out from exhaustion and crashed his vehicle. The terrifying accident resulted in a crushed chest, broken ribs that punctured his thorax, and 14 broken bones. His thorax filled with air and blood, nearly costing him his life.

Studies already show that going without enough sleep can have devastating consequences. According to the AAA Foundation for Traffic Safety, drivers who sleep only five or six hours a night have an impairment level similar to that of someone who is intoxicated. The statistics are much worse for drivers who sleep just five or six hours within a 24-hour period, as these individuals are twice as likely to experience an accident as people who sleep seven or more hours.

For doctors, the stakes are both personal and professional. When the same neurosurgeon returned to work after his recovery, he found that his sense of balance had been dramatically impacted. There were several times he lost his balance during surgery and actually fell on top of patients as he operated. Studies also show that drowsy doctors are more likely to suffer memory loss and impaired judgment.

According to another report, doctors in just about every stage of their career are expected to perform on very little sleep. In residency, which is the training period doctors must complete after graduating medical school, most residents must work up to 80 hours each week in a hospital, including shifts that can last as long as 28 hours at a time.

What’s alarming about this data is that the least experienced doctors are the ones who are most likely to be sleep-deprived on the job. Depending on what specialty a new doctor chooses to pursue, the residency period can last a number of years. During this time, doctors are expected to work extremely long hours and sometimes for comparatively little compensation. Because residencies can be extremely competitive, some doctors may be reluctant to speak up about their extreme exhaustion. Instead of asking for help or modified hours, they might be inclined to continue working demanding hours. This mentality can lead to serious medical errors that put patients’ lives in danger.

Working hours tend to improve for doctors after residency, but the typical doctor’s work week is still longer than that of the average worker. One report says doctors on average work 60 hours per week after finishing their residency, with some physicians putting in longer hours than average.

In many cases, patients have no way of knowing how long their doctor has been working on any given day. However, surveys show that the majority of people would rather switch doctors than be treated by one who is chronically sleep-deprived. According to one poll, 90 percent of people surveyed said they would ask for a new doctor if they found out their provider was at the end of a 24-hour shift.

Studies show that sleep-deprived doctors make more mistakes. In a study published in the New England Journal of Medicine, interns made twice the number of mistakes interpreting electrocardiograms after working a shift of 24 hours or longer.

Other studies have shown that doctors who work 30-hour shifts made 36 percent more errors than doctors who work 16 hours at a time. In some cases, doctors on long shifts have made serious mistakes, such as administering a drug known to cause a dangerous allergic reaction in the patient. Sleep deprivation is known to cause an impact on cognitive ability, memory, fine motor skills, mood, and reaction times. Prolonged sleep deprivation has also been linked to heart disease, long-term memory issues, and even a decreased lifespan.

Any individual who believes he or she has been harmed by a medical mistake caused by a sleep-deprived doctor should speak to an experienced medical malpractice lawyer. It’s important to consult with a lawyer, as the time limits for filing a claim are relatively short, especially if a municipal hospital is involved. You may be entitled to compensation for your injuries and other damages. Your lawyer can help you understand the options in your case.

Prior results cannot and do not guarantee or predict a similar outcome with respect to any future case. Recoveries always depend upon the facts and circumstances of each case, the injuries suffered, damages incurred, and the responsibility of those involved