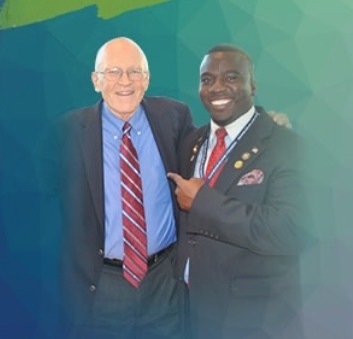 New York, New York — Leadership expert Dr. Ken Blanchard and best-selling author Gibson Sylvestre, MBA released a recorded conversation aimed at promoting unity and racial diversity. “My mother taught me that God doesn’t make junk” say Dr. Blanchard. Dr. Ken Blanchard’s is one of the top leadership experts in the world today. Dr. Blanchard is one of the world’s foremost servant leadership teachers. Blanchard’s widely-read 1982 classic, The One Minute Manager, coauthored with Spencer Johnson, has sold more than 13 million copies and remains on bestseller lists today. Having lived 81 years Blanchard a close friend and mentor to Sylvestre explains how his mother taught him to love and accept people from all backgrounds regardless of color or creed. More than five decades separate Blanchard and Sylvestre in terms of age, however, their love for God, family, country, servant leadership corporate training, business, and sports unite them in a dynamic way. “I have fundamentally and unequivocally dedicated my life’s work to bringing people together from diverse backgrounds. I seek to unite with the Ken Blanchards of the world to bring about change in the spirit of the reverend Martin Luther King Jr. and Mother Teresa” says Sylvestre.   The full talk entitled:

“A conversation about love and racial unity” can be viewed on Sylvestre’s YouTube channel at: https://www.youtube.com/watch?v=v0v4lDQ1WRM&t=113s

This conversation comes after an entire week of protests all over the United States and the world seeking justice for George Floyd an unarmed black man killed by police. The two men hope they add to the ongoing conversation regarding justice, peaceful protest, and racial unity.

Feel free to reach out to us for interview requests or any questions you may have. Reach out to us at: https://www.gibsonsylvestre.com/contact

Dr. Ken Blanchard’s is one of the top leadership experts in the world today. Ken’s impact as an author is far reaching. His iconic 1982 classic, The One Minute Manager, coauthored with Spencer Johnson, has sold more than 13 million copies and remains on bestseller lists today. In the past three decades he has authored or coauthored 60 books whose combined sales total more than 21 million copies. His groundbreaking works—including Raving Fans, The Secret, and Leading at a Higher Level, to name just a few—have been translated into more than 42 languages. In 2005 Ken was inducted into Amazon’s Hall of Fame as one of the top 25 bestselling authors of all time. Drs. Ken and Marjorie Blanchard incorporated The Ken Blanchard Companies in 1979 with three simple goals—to make a difference in people’s lives, to drive human worth and effectiveness in the workplace, and to help each organization they work with become the provider, employer, and investment of choice.

The Ken Blanchard Companies is the global leader in management training. For more than 35 years, Blanchard has been creating the best managers in the world, training over 150,000 people each year. From the award-winning First-time Manager program—based on the best-selling business book, The New One Minute Manager®—to SLII®, the most widely taught leadership model in the world, Blanchard is the provider of choice of Fortune 500 companies as well as small to medium businesses, governments, and educational and nonprofit organizations.

Go to https://www.kenblanchard.com/ to find out more.

Mr. Gibson Sylvestre, MBA has been coaching people to be the best version of themselves for over two decades. He has traveled to over 50 nations around the world bringing his positive message of transformation and change. He is the Chairman & CEO of  Infinite Possibilities International a top ranked business management consulting firm.

He has earned a master’s degree in Business Administration & Corporate finance. Mr. Sylvestre has challenged and distinguished himself by taking online courses at Harvard University and MIT.

Mr. Gibson Sylvestre is a distinguished member of THE GUILD® elite platform that offers business leaders from all over the world the opportunity to obtain proven expertise by top experts. THE GUILD® curates the top subject matter experts to solve hard business problems, as a cost-effective alternative to internal staffing or traditional consulting. He is a graduate of Life Work Leadership® an invite-only CEO group that emphasizes balancing family life, business life, and community engagement.

Gibson Sylvestre a best-selling author he has written several poignant books such as:

Gibson’s relentless desire to help others succeed has led him to reach countless lives around the globe. Many have been inspired to reach their untapped potential.

To find out about his work, podcast, or brand visit: www.gibsonsylvestre.com

"Gibson, thank you for your fascinating book. I have read through it on the plane flying home. It is an answer to prayer."

“Ever since I met Gibson Sylvestre, I’ve admired his energy and enthusiasm for helping people become the best version of themselves. When he speaks, he speaks from the heart—with knowledge and experience that can help any individual or organization be better than they are today.”

“Ever since I met Gibson Sylvestre his positive energy was contagious. He genuinely loves people and you can’t fake that! He is sharp, intelligent, and a master communicator. He has the perfect skills to assist large corporations as well as individuals succeed in life or in business. Gibson is America’s choice for anyone seeking to take their game to the next level!”

“On many levels and in many different ways, we can have a tremendous impact on our world. If you’ve already identified ways you can touch your neighbors, Gibson’s book will help encourage and strengthen your spirit. If you have not, these pages will help you find that path!”

“I would like to take this opportunity to recommend Gibson Sylvestre to your company. I am convinced that his hard work, determination, and enthusiasm will be an asset to your organization.”

Where Can Listeners Find the Podcasts?

All of Mr. Gibson Sylvestre’s MBA’s podcasts can be found on every platform where podcasts are offered (Apple Podcasts, IHeart Radio Podcasts, Spotify Podcasts, and Google Podcasts). The podcast feature mercurial, smart, interesting, and fearless content created to engage a