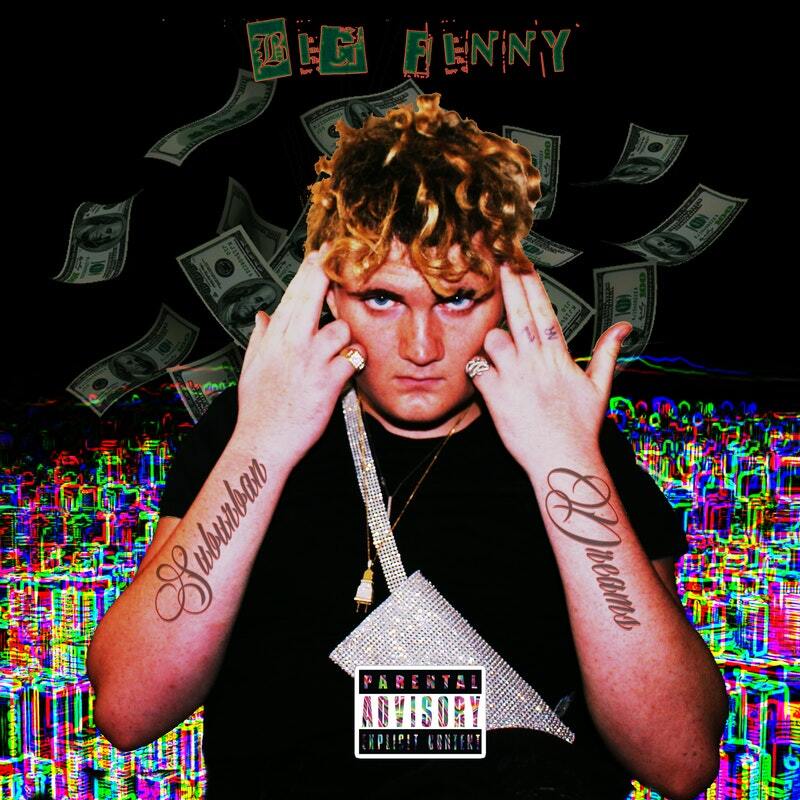 We’ve all met a visionary kid once or twice. They use big words.  They seem about 10 years older than they are.  They are glittering genies, restless in their little kid bodies.

Big Finny’s never really had a “little” kid body.  He’s a beefy ox of a kid with scrappy whiteboy dreads; tough, determined eyes; a sweet, humble smile; and a tween-sized crystal sparkly purse hanging on for dear life across his barrel chest (he calls this his “Finny Pack”).  His first original song was “He Likes to Poop in His Underpants” composed spontaneously on video at age 4.  Finny is quick to clarify that it was purely fictional.

Big Finny’s path to becoming the engineer, vocalist, and composer that he is today has been fast, focused, and intense.  Talking with him through video chat feels the same.  This brain is on fire.

His debut album, created during quarantine, is loaded with salient pop trap hooks, conglomerate layered vocals, surprising harmonies, and catchy melodies all finessed together with 16-year-old-boy-lyrics that stick in your head like a ball of duct tape.  The vocal and sound engineering, which is perhaps the most beyond-his-years talent,  is all Finny.  Like so many inspired boys his age, he scours the internet for beats that trigger him.  Unlike so many boys his age though, he cannot put the song down until every acoustic effect and layered harmony is “right”.

Finny engineers, composes, and vocal coaches several of his friends/artists who are featured on the album.  This has led to a rich, unplanned diversity in style highlighted most by the reggaeton and bilingual “Back In The Woods”.  "MF Livin' Pt. 2" engulfs the listener in a bassy, melodic, trap instrumental that grounds Finny’s pop melodies and layered vocal effects.  Finny’s impressive vocal capacities are showcased in the emotional, sad trap vibe of "As a Friend", and the adoring “So Bad” where he soulfully sings in his smooth bass voice to the girl of his dreams, “Girl, I just want you to really love yourself deep down”.  “Not A Player” is the most pop-sounding track with a bouncy beat and the kind of high caliber hook that sets up camp in your head for weeks.  A few songs later, the screaming, fierce banger  “Bucket of Blood” is destined to be the soundtrack to moshpit mayhem or many a personal-best day at the gym.

Big Finny cites his early influences as Muse, Arianna Grande, Mariah Carey, Muse, Sublime, Bad Brains, Black Flag with his more current influences being $uicideBoy$, YoungBoy Never Broke Again, The Kid LAROI, and iann dior.  Big Finny’s whole man-boy personality and album accurately portrays a brilliant young artist on the rise, lucky enough to be slightly oblivious to who he or his music SHOULD be, and lucky enough to have used his quarantine time in the best way he could.  Finny has tapped into The Flow and he’s got the zooming mind and fantastical intensity required to wrangle that flow into something remarkable and exciting.  Grab a seat.