With smiles, pride and emotion, the first same-sex couples tied the knot in Switzerland on Friday following a referendum that changed the landscape for LGBTQ rights in the country.. Before Friday, same-sex couples could only register a civil partnership -- a status which does not provide the same rights as marriage.

With smiles, pride and emotion, the first same-sex couples tied the knot in Switzerland on Friday following a referendum that changed the landscape for LGBTQ rights in the country.

Among the first to get married were Aline, 46, and Laure, 45, who have been together for 21 years and converted their civil union into marriage at the plush Palais Eynard in Geneva.

Beneath a sparkling chandelier in a mirrored salon, and with a dozen or so close friends and family in attendance, the couple exchanged touching words recalling their years together and love for each other.

"You are a wonderful person," said Aline, looking into Laure's eyes.

"I still want to spend the rest of my life with you."

Holding hands throughout the ceremony, they signed the official documents, followed by their witnesses.

"I am now very pleased to announce that you are officially married," said Geneva mayor Marie Barbey-Chappuis, who conducted the ceremony.

The room burst into applause as the couple shared a kiss.

There was no exchange of rings, with the pair instead opting to leave on the gold bands from their civil partnership struck exactly 19 years ago on July 1, 2003.

"It's really important for us to have this visibility, to show that marriage is open to everyone, now and for future generations too," Laure told reporters afterwards.

Her wife Aline added: "It took rather a long time in Switzerland. But now it's done, it's great, and with a big 'Yes' majority, so we are very, very happy."

The Swiss government's plans to finally introduce "marriage for all" were challenged by opponents, who successfully triggered a referendum held last September. 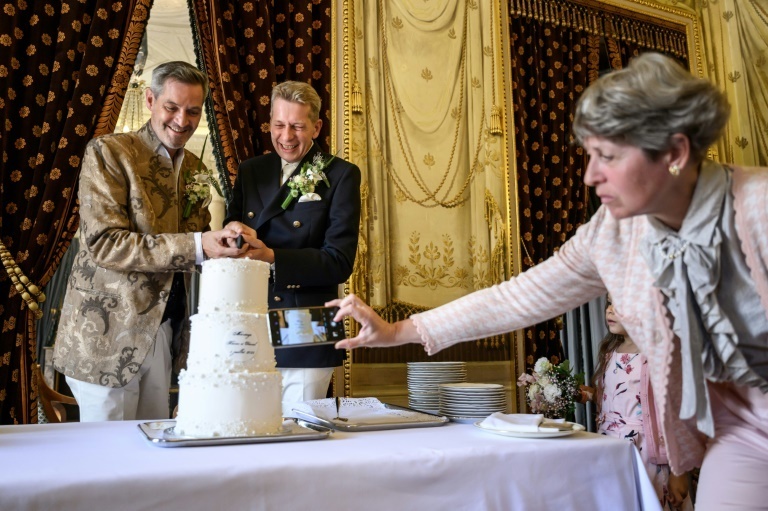 But 64.1 percent of voters backed the introduction of same-sex marriage in the wealthy Alpine nation.

Switzerland was one of the last remaining western European nations where same-sex marriages had yet to be adopted. The Netherlands was the first to make the change in 2001.

"It was very moving. It's a big moment and sends a very strong message to society -- being free to love and be loved," mayor Barbey-Chappuis told AFP after the first ceremony.

"The symbolism was particularly strong and the emotion too," she said.

"It was high time that marriage became perfectly equal in Switzerland."

Later Friday, the Palais Eynard held its first wedding between two men: Daniel, a 54-year-old interior designer and 51-year-old stylist Xavier, who have been a couple for 15 years.

Seventy people filled a room in the 19th-century parkside venue to witness the ceremony.

The pair exchanged their vows with classical music playing to ensure that only they could hear each other.

Daniel put on his glasses to read his, the card trembling slightly in his hand as Xavier comforted him by holding his other arm.

Married to huge applause, they walked out arm in arm to the waiting wedding cake and champagne flutes, where Xavier's father told the guests: "Thank you Switzerland. At last."

Both couples were given a wrapped gift from the city, a bouquet, and the pen with which they became married. 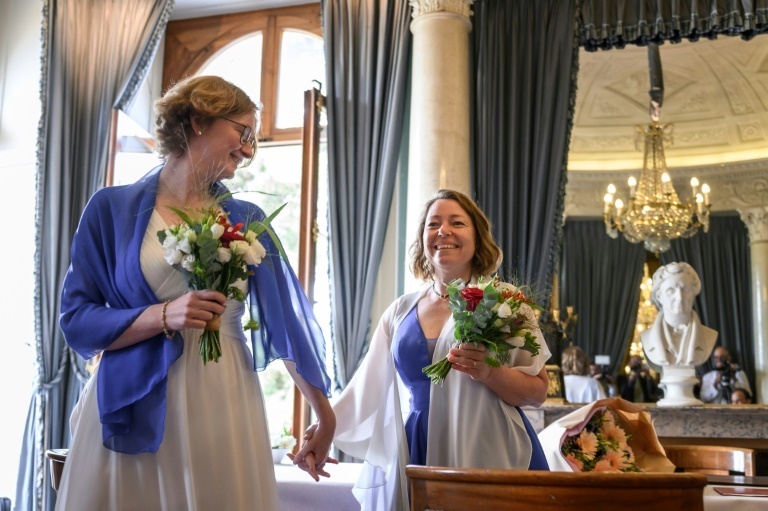 "We're intensely happy and it's something fabulous for us," Xavier told reporters.

"We hope to live our lives simply and like everyone else."

Switzerland decriminalised homosexuality in 1942. Before Friday, same-sex couples could only register a civil partnership -- a status which does not provide the same rights as marriage.

But same-sex couples can now marry in civil ceremonies and enjoy the same rights as other married couples.

Notably, same-sex foreign spouses are now eligible to apply for citizenship through a simplified procedure and same-sex couples are now permitted to adopt jointly.