NATO on Tuesday kicked off momentous accession procedures for Sweden and Finland, aiming to expand the military alliance to 32 countries in reaction to Russia's war in Ukraine.. They announced intentions to join NATO in May, triggered by Russia's February invasion of Ukraine and ongoing war there.

NATO on Tuesday kicked off momentous accession procedures for Sweden and Finland, aiming to expand the military alliance to 32 countries in reaction to Russia's war in Ukraine.

"This is an historic day, for Finland, for Sweden, for NATO, and for Euro-Atlantic security," NATO chief Jens Stoltenberg said after protocols were signed launching the required ratification process in all alliance countries.

The foreign ministers of Sweden and Finland, alongside Stoltenberg, also qualified the occasion as "historic".

"The membership of both Finland and Sweden will not only contribute to our own security, but to the collective security of the alliance," said Finland's Pekka Haavisto.

The two Nordic countries had long maintained non-alignment status, even though they have held exercises with NATO and have inter-operable weapons systems.

They announced intentions to join NATO in May, triggered by Russia's February invasion of Ukraine and ongoing war there.

In a sudden change of course, Sweden and Finland -- the latter of which fought a Soviet invasion in 1939-1940 and shares a 1,340-kilometre (830-mile) border with Russia -- asked to come under NATO's mutual-defence umbrella.

Their bids hit a road-bump when Turkey, a NATO member, threatened to block their entry.

Turkish President Recep Tayyip Erdogan had accused Sweden and Finland of being havens for Kurdish militants he has sought to crush, and for promoting "terrorism".

But Erdogan dropped his objections last week, in time for a NATO summit in Spain, after negotiations resulted in concessions -- and a US promise of new warplanes for Turkey.

The summit ended up extending invitations to Sweden and Finland to formally apply, leading to lightning-fast negotiations on Monday then Tuesday's signing.

Erdogan says he could still slam the door shut if Sweden and Finland don't follow through on their promises, which include possible extradition agreements.

The months-long period during which all NATO countries have to ratify the Nordic countries' membership is a risky moment, not only because of Turkey's threat but also because the NATO mutual-defence clause is not yet applicable. 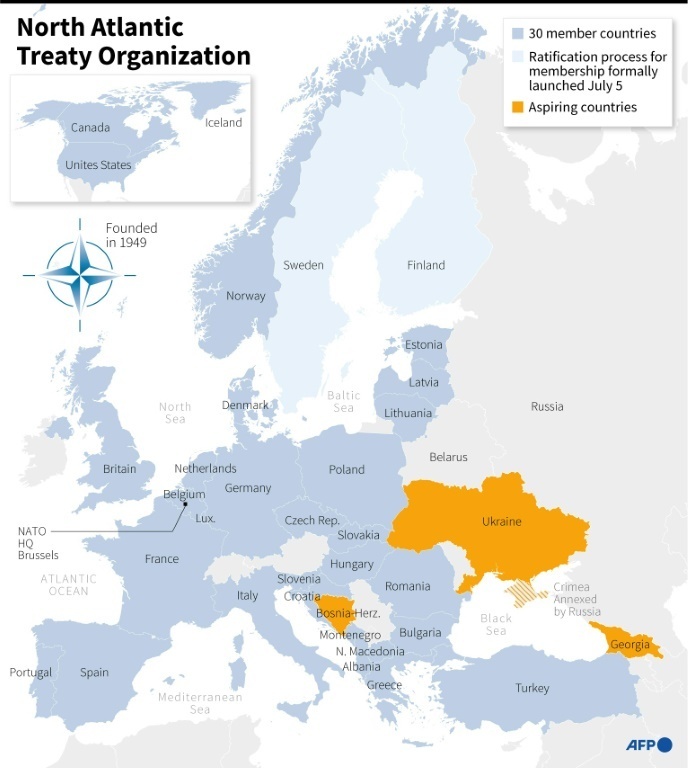 Stoltenberg said: "I count on allies to deliver a quick and swift and smooth ratification process."

He emphasised that "many allies have already made clear commitments to Finland and Sweden’s security" during the interim period, and pointed out a boosted NATO presence in their region.

Swedish Foreign Minister Ann Linde said security assurances had been made by the United States, Britain, France, Germany, Spain, Italy, Poland and NATO members in the Nordic and Baltic regions.

"Moments after Finland and Sweden’s accession protocols were signed in Brussels, I summoned my government and proposed to Estonian parliament to convene tomorrow for accelerated ratification," Estonian Prime Minister Kaja Kallas tweeted.

Germany's parliament was poised to ratify as early as the end of this week. Sources in the ruling coalition said a first reading of the text was likely on Wednesday, with the final two readings on Friday.

"This is the fastest accession process in NATO's history so far," Stoltenberg said. US Senate moves to bring Finland, Sweden into NATO