A political crisis in inflation-ravaged Argentina that was sparked by the economy minister's resignation has spooked markets and generated fears resulting in panic buying and hasty price hikes, as the informal exchange rate soars.. The official exchange rate is 132.

A political crisis in inflation-ravaged Argentina that was sparked by the economy minister's resignation has spooked markets and generated fears resulting in panic buying and hasty price hikes, as the informal exchange rate soars.

"Every day it's like going out to hunt a lion," Luis Sacco told AFP in front of his electronics store in the capital Buenos Aires.

Since Monday, prices have risen dramatically at shops and businesses across the country.

Guzman was the chief negotiator in Argentina's haggling with the International Monetary Fund to restructure a $44 billion debt.

But he was collateral damage in a power struggle between Fernandez and his vice-president, the former president Cristina Kirchner.

Opposition to Guzman's fiscal policies from the former president's influential faction within the coalition resulted in him quitting and being replaced by Kirchner loyalist Silvina Batakis.

She is the one who must now steer agricultural powerhouse Argentina through its years-long economic crisis.

Inflation, which surpassed 60 percent in the last 12 months, is hurting ordinary Argentines, who have been gripped by the political soap opera.

"It was the longest Sunday of my life," said Sacco, the electronics store owner who spent an anxious weekend "not knowing whether or not to lift the shutters, (and) a Monday thinking about catastrophe."

The black market peso briefly dropped from 239 to the US dollar to 280 on Monday before stabilizing at 250. The official exchange rate is 132.

But amidst the uncertainty and panic, sales actually soared for many businesses with consumers afraid prices would soon increase.

That is a major concern in a country struggling with years of high inflation.

"There was no earthquake. There are sales, more than ever," said Sacco.

But "people are also buying because they know that if they wait, the price will increase. It's the time to sell stock." 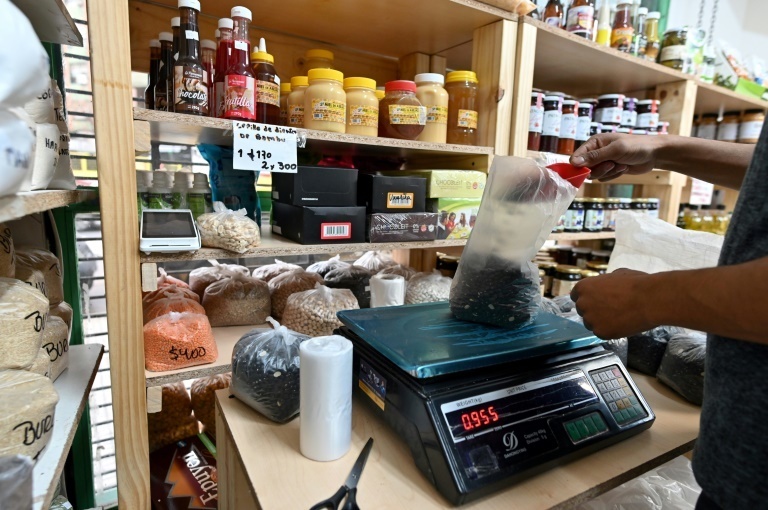 He pushed up his prices by 15 percent a few weeks ago, with another five percent increase this week, while he has now hiked prices on his imported goods by 30 percent.

Fernando Agote, who owns a hardware store, says "things are calming down" after some initial panic buying despite little change in prices.

But conversely, many suppliers have suspended their sales, waiting to see what happens to prices before taking new orders, so they do not get left short-changed.

"There was a lot of anxiety, a lot of speculation. No one knows where the real prices are, they're not set by costs," said Agote.

Luckily for him, only one of his suppliers suspended their sales on Monday.

At a paint shop in the Floresta neighborhood, prices were pushed up 20 percent with no drop in sales volume.

"Everything was sold," said the manager, Leo. However, supplies were not replenished.

"Only one company delivered."

Leo expects that next week suppliers "will change all their price and payment conditions."

After 20 years in the business, Leo has lived through several economic crises in Argentina.

"This is unusual because people have money, they are consuming, these days we've been selling like crazy, online orders have exploded," he added.

The change in government comes at a time when workers are receiving a biyearly salary bonus, leaving them flush with cash.

Even so, "you have to be cautious and not change things more than they are so you don't spark an unnecessary inflation snowball. We've already had enough of those," said Alberto Sorrentino, 60, who runs a construction materials company.

He expects prices of "domestic products will rise between six and 10 percent, and imports between 10 and 20 percent."

The biggest price hikes have been in the food industry.

"What comes from abroad like banana, papaya and melon increased 30 percent since Monday," said John Quinteros, who runs a fruit and vegetable shop in Floresta.

"People are still buying, but less."

In the Villa Crespo neighborhood a shop selling natural products has a sign informing customers it had not pushed up prices.

"We've decided to maintain them for as long as we can," said Liliana de los Santos, admitting that "it's a risk."