A fierce heatwave sweeping western Europe was on Tuesday set to smash Britain's all-time temperature record, as swathes of the continent wilted under a scorching sun which has fed ferocious wildfires and stretched emergency services.. It is playing havoc with Britain's transport network, as some rail lines close Tuesday and other services are hampered.

A fierce heatwave sweeping western Europe was on Tuesday set to smash Britain's all-time temperature record, as swathes of the continent wilted under a scorching sun which has fed ferocious wildfires and stretched emergency services.

Forecasters in the UK have for days been predicting the current national record of 38.7 degrees Celsius (102 degrees Fahrenheit), registered in 2019, would be broken Tuesday and 40C breached for the first time.

The meteorological agency, the Met Office, said it had provisionally been the warmest night on record heading into the day, after temperatures remained above 25C in most places.

Meanwhile Monday's 38.1C reached in Suffolk, in eastern England, made it the UK's third-hottest day ever, as Wales broke its record temperature after the mercury climbed to 37.1C. 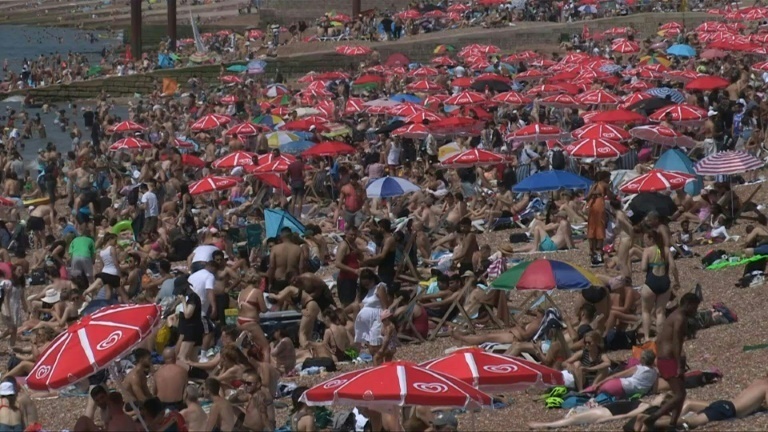 Experts blame climate change for the latest unprecedented heatwave, and note the more frequent extreme weather will only worsen in years to come.

It is playing havoc with Britain's transport network, as some rail lines close Tuesday and other services are hampered.

"A lot of our infrastructure is just not built for this temperature," Transport Secretary Grant Shapps told Sky News.

Across the Channel in France, a host of towns and cities recorded their highest-ever temperatures on Monday, the national weather office said. 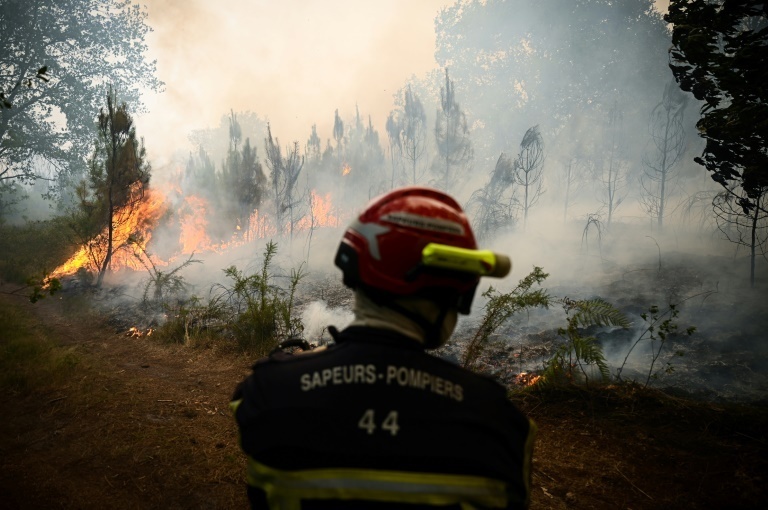 Firefighters in France's southwest were still struggling in the crushing heat to contain two massive fires that have caused widespread destruction.

For nearly a week now, armies of firefighters and  waterbombing aircraft have battled blazes that have mobilised much of France's firefighting capacity.

The heatwave is the second to engulf parts of Europe in recent weeks.

European Commission researchers said nearly half (46 percent) of EU territory was exposed to warning-level drought. Eleven percent was at an alert level, and crops were already suffering from lack of water. 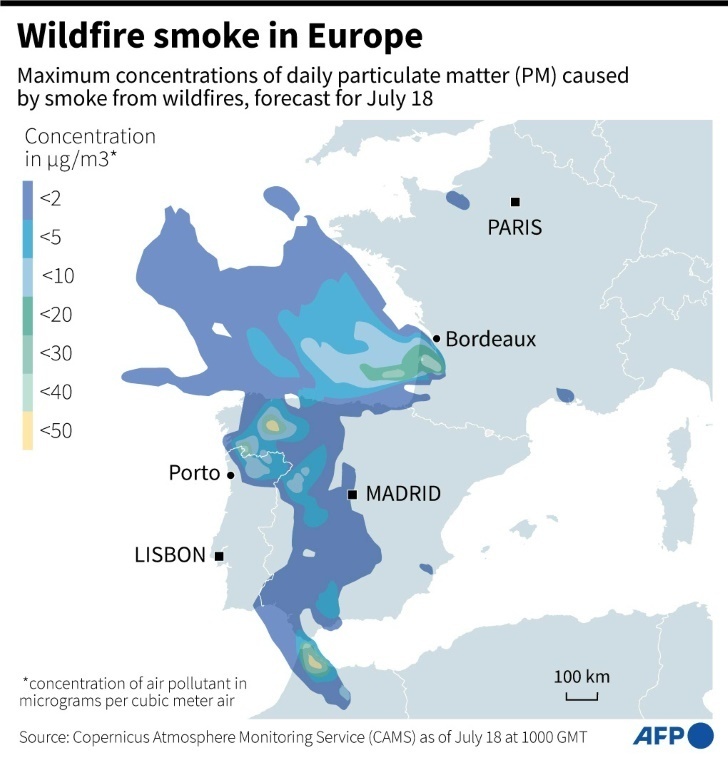 Blazes in France, Greece, Portugal and Spain have destroyed thousands of hectares of land.

The blaze was literally "blowing things up" with its ferocity, said Marc Vermeulen, head of the local fire service. "Pine trunks of 40 years are bursting."

A total of 8,000 people were evacuated from near the dune Monday as a precaution, while changing winds blew thick smoke into residential areas, officials said.

Hurriedly packing her car, Patricia Monteil said she would go to her daughter's home nearby. "But if that goes up in flames too, I don't know what to do."

Around 32,000 tourists or residents have been forced to evacuate in France, many to emergency shelters.

On Monday evening, prosecutors in the southwest city of Bordeaux said a man suspected of having started one of the fires had been taken into custody.

In Spain, a fire burning in the northwestern province of Zamora claimed the life of a 69-year-old shepherd, regional authorities said. On Sunday, a fireman died in the same area.

Later Monday an office worker in his fifties died from heatstroke in Madrid. 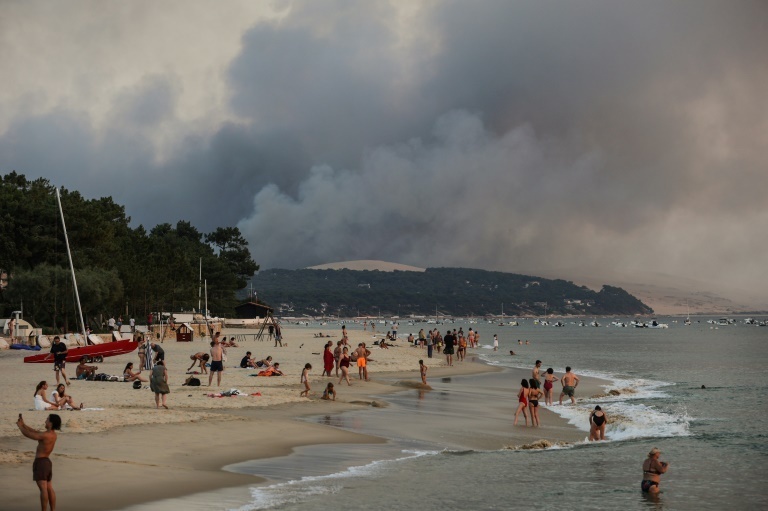 Authorities have reported around 20 wildfires still raging from the south to Galicia in the far northwest, where blazes have destroyed around 4,500 hectares of land.

The fires in Portugal claimed two more lives in the northern Vila Real region, after a car carrying two villagers crashed as they appeared to be trying to flee a fire zone, officials said.

"We found the car and these two people, aged around 70 years, completely burnt," said the mayor of Murca, Mario Artur Lopez. The victims were from the nearby village of Penabeice.

Almost the entire country has been on high alert for wildfires despite a slight drop in temperatures, which last Thursday hit 47C -- a record for July.

The fires have already killed two other people, injured around 60 and destroyed between 12,000 and 15,000 hectares of land there. 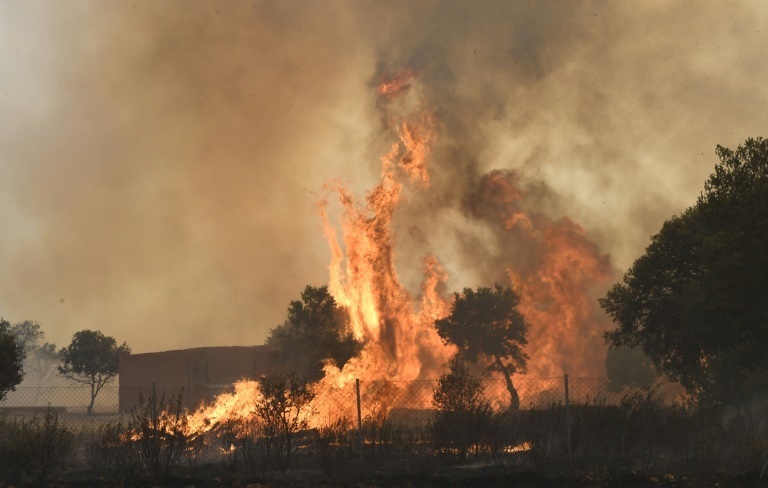 Back in Britain, the heatwave has permeated the race to replace outgoing prime minister Boris Johnson.

Despite the record temperatures, some of the Conservative MP candidates have suggested they may not keep 2050 emissions reduction targets and green energy subsidies, as they bid to differentiate themselves from their rivals.

Johnson himself has faced criticism for not taking it seriously enough after he failed to attend several emergency meetings on the crisis.

He instead hosted a farewell party at his state-funded country retreat on Sunday.

The extreme temperatures saw flights temporarily suspended Monday at Luton Airport near London and at Royal Air Force base Brize Norton due to "defects" on the runway.

Trains were cancelled and schools closed in some areas.

Right-wing tabloid the Daily Mail took aim at the country's response to the situation, claiming "snowflake Britain had a meltdown" on its front page.

"I come from Sudan," he said. "Forty, forty-five degrees is just the norm. This is as good as it can be." 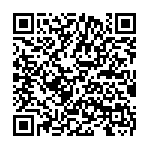