A weather emergency was declared in Karachi Monday as heavier-than-usual monsoon rains continue to lash Pakistan's biggest city, flooding homes and making streets impassable.. In Karachi, at least two people were electrocuted Monday by power lines that fell into flooded streets -- a regular cause of death in the city during the monsoon.

The monsoon, which usually lasts from June to September, is essential for irrigating crops and replenishing lakes and dams across the Indian subcontinent, but also brings a wave of destruction each year.

Pakistan ranks eighth on a list of countries most vulnerable to extreme weather caused by climate change, according to the environment NGO Germwatch.

The provincial Sindh government announced a public holiday Monday in Karachi and Hyderabad in a bid to avert flood chaos, but low-lying areas -- already drenched by weeks of heavy rain -- were soon the scenes of devastation.

"More rains are forecast in Karachi until tomorrow," warned Sardar Sarfraz, director of the Met office. 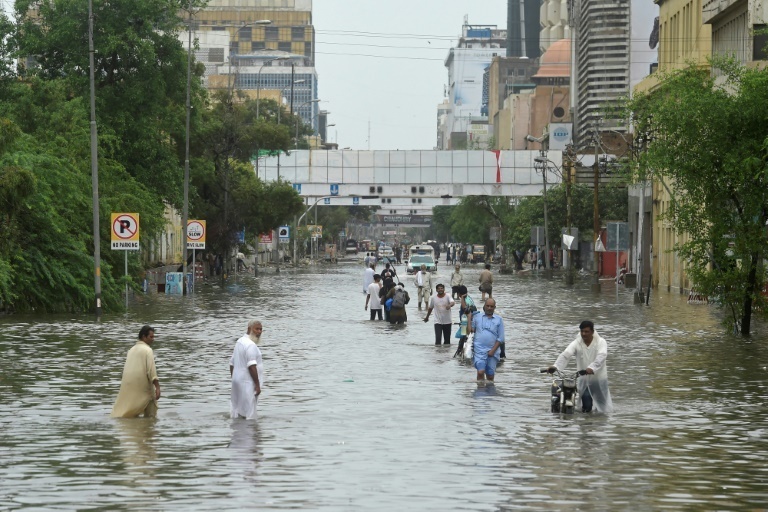 The National Disaster Management Authority said at least 312 people had died since June as a result of the monsoon rains.

In Karachi, at least two people were electrocuted Monday by power lines that fell into flooded streets -- a regular cause of death in the city during the monsoon.

The heavy downpour also disrupted flights and train operations in the megacity of 15 million.

The worst floods of recent times were in 2010 -- covering almost a fifth of the country's landmass -- killing nearly 2,000 people and displacing 20 million. 'Everything is destroyed': Pakistan flood survivors plead for aid