Philippine President Ferdinand Marcos Jr vowed Monday to slash poverty, rein in soaring food prices and boost renewable energy, as he unveiled an ambitious blueprint for his six-year term. . Marcos Jr vowed to more than halve the poverty rate to single digits by the end of his term and offer financial relief to many farmers, including forgiving debts.

In his first State of the Nation address, Marcos Jr offered a laundry list of targets, ranging from getting children back into classrooms, easing the debt burden of farmers, and expanding internet access.

Unlike his predecessor Rodrigo Duterte, who used to frequently go off script in a stream of consciousness and threaten to kill people, Marcos Jr stuck to a prepared speech that was methodical and heavy on numbers.

After inheriting an economy ravaged by Covid-19 lockdowns and inflation, the new president expressed cautious optimism for the future -- even as the war in Ukraine and supply chain disruptions drive up food and fuel prices.

"I do not intend to diminish the risks and challenges that we face in this turbulent time in global history," he told the audience of lawmakers, diplomats and judges.

"And yet I see sunlight filtering through these dark clouds. We have assembled the best Filipino minds to help navigate us through this time of global crisis."

Marcos Jr, who is the son and namesake of the country's late dictator, spoke for 74 minutes without mentioning human rights, corruption or peace talks with militant groups.

Instead, the 64-year-old scion focused on the economy, clean energy, agriculture, and helping poor Filipinos.

Marcos Jr vowed to more than halve the poverty rate to single digits by the end of his term and offer financial relief to many farmers, including forgiving debts.

Renewable energy was "at the top of our climate agenda", he said, insisting it was time to reconsider building nuclear power plants in the disaster-prone country.

He also pledged to boost agricultural productivity and bring down food prices.

"These will not be done in one day, one month or one year. But we need to start now," he said.

Marcos Jr was swept to power by a landslide in the May 9 elections, completing his family's remarkable comeback from pariahs in exile to the peak of political power.

Hours before his speech, several thousand protesters marched peacefully along a major avenue to oppose his victory and criticise his first weeks in office. 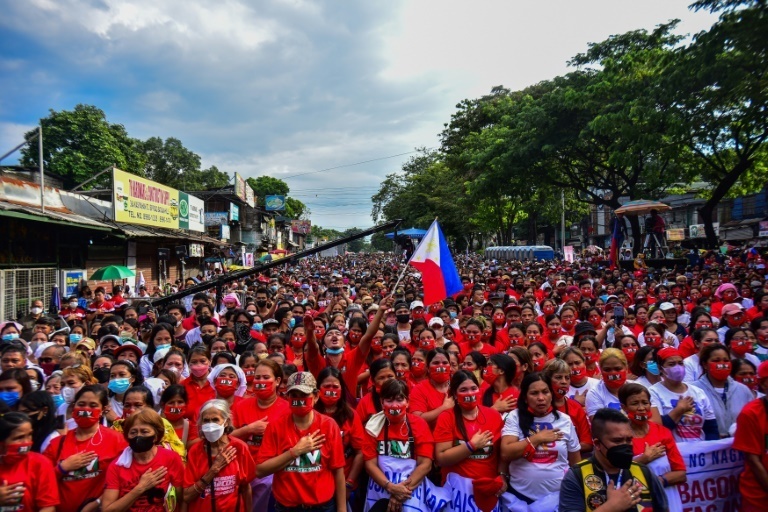 "He's just sitting around, he's busying himself revising history instead of doing the urgent work of stopping the rising costs of commodities especially food, distributing land to farmers and raising the wages of workers," said Angelo Suarez, who volunteers for an agricultural workers union.

Outside Congress, thousands of Marcos Jr supporters wearing red, his campaign colour, also gathered, waving the Philippine flag and holding signs with slogans such as "Progress".

Congressman Ralph Recto said the new president's speech was "brave, not boring" and gave the country a "fiscal reality check".

The higher cost of living is worsening the financial misery of millions of Filipinos already struggling to feed their families.

The central bank recently raised interest rates for the third straight month as it struggles to rein in surging energy prices.