Scotland's ruling nationalists on Tuesday angrily rounded on British Conservative frontrunner Liz Truss, after she accused their leader Nicola Sturgeon of being a pro-independence "attention seeker".

Previous polling had put Truss ahead of Sunak by more than 20 points among Conservative members. But according to a new poll reported by The Times on Tuesday, her lead has narrowed to just five points: 48-43 percent.

Truss waded into debate about the UK's constitutional future at a Tory hustings event in Exeter, southwest England, late Monday.

"I think the best thing to do with Nicola Sturgeon is ignore her," she said.

While the comments won loud cheers from the party members present, they drew criticism for undermining the UK's devolved system when she is also clashing with the European Union over post-Brexit trade in Northern Ireland.

The Scottish National Party (SNP) is pressing for a second referendum on independence for Scotland.

Asked if she could back such a vote, Truss echoed a famous speech by her idol Margaret Thatcher in replying: "No, no, no."

John Swinney, Sturgeon's deputy as first minister of Scotland, called the remarks "obnoxious" and contrasted the roughly 200,000 Tory members with the 2.4 million votes won in elections last year by the SNP.

"Nicola Sturgeon has far more democratic legitimacy than Liz Truss is going to have if she becomes the prime minister," he told BBC television.

"And I think Liz Truss has absolutely no right or foundation to make these remarks," Swinney said, arguing Truss's "silly, intemperate intervention" had made the case itself for Scotland to go its own way.

Truss was speaking at the second of 12 hustings as Tory members decide between her and former finance minister Sunak as the successor to Prime Minister Boris Johnson.

Sunak has also ruled out another referendum, last week calling it "the wrong priority at the worst possible moment", after Scots voted narrowly in 2014 to stay in the UK.

The SNP, arguing that Brexit has transformed the debate, wants to hold a second plebiscite in October 2023.

The Supreme Court in London plans to hold hearings on October 11-12 this year on whether that would be legal without approval from the UK government, which by then will be led by Truss or Sunak.

"Keeping the UK together means confronting nationalism and beating them at the ballot box. Only I have a plan to do this," Sunak said Tuesday after winning the endorsement of 10 Scottish Conservative colleagues.

Tory members have begun voting by post and online after the scandal-tainted Johnson was forced to announce he will stand down. The result is due on September 5.

Truss, at the Exeter hustings, was reminded by the moderator that Sturgeon has a democratic mandate to govern Scotland. She instead dismissed the SNP leader as an "attention seeker".

The Conservative leadership candidate called herself a "child of the union", having attended primary school in Scotland.

"What we need to do is show the people of Scotland, Northern Ireland and Wales what we're delivering for them and making sure that all of our government policies apply right across the United Kingdom."

Truss's remarks about the leader of the UK's second-biggest nation revived criticism that her language can be ill-advised, as when she encouraged Britons to fight in Ukraine at the start of Russia's invasion. 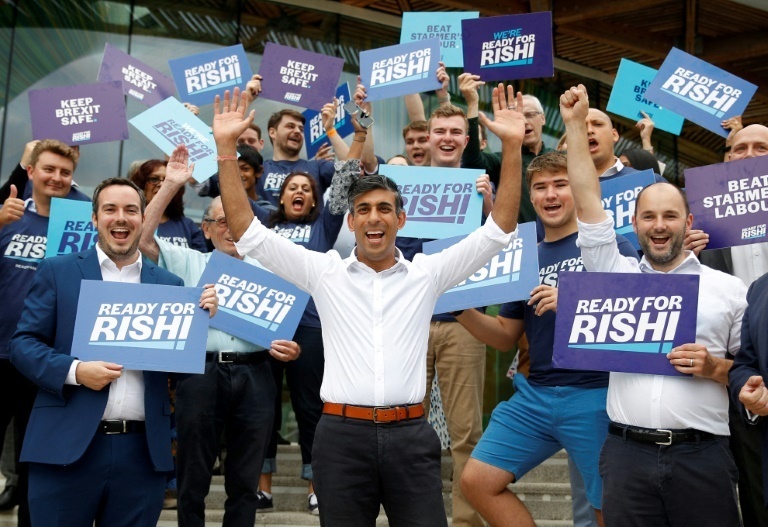 And many pointed to Truss's own high profile on social media and repeated invocation of Thatcher, the Conservative premier throughout the 1980s, in photo opportunities such as when she posed atop a tank.

But Jacob Rees-Mogg, a Truss ally in the Johnson cabinet, accused Sturgeon of "always moaning" instead of tackling Scotland's "failing" education and health systems.