Noxious gases from an Icelandic volcano threaten to pollute the air of a nearby village and risk spreading to the capital Reykjavik, the Icelandic Meteorological Office (IMO) said on Friday.. It said the pollution could reach Reykjavik, 40 kilometres from the volcano, by Saturday.

Noxious gases from an Icelandic volcano threaten to pollute the air of a nearby village and risk spreading to the capital Reykjavik, the Icelandic Meteorological Office (IMO) said on Friday.

The weather agency said it expected particularly heavy gas pollution in Vogar, a village of some 1,000 inhabitants about five kilometres (three miles) northeast of Fagradalsfjall, the uninhabited valley where the volcano is located.

It said the pollution could reach Reykjavik, 40 kilometres from the volcano, by Saturday.

Concentrations of sulphur dioxide could reach up to 2,600 microgrammes per cubic metre, a level considered "unhealthy for the sensitive", according to the Environment Agency of Iceland.

But the IMO warned that their models were uncertain since the "flow from the eruption is very uneven".

The warning came after measurements showed that activity had halved at the volcanic fissure, which has been spewing glowing lava since Wednesday, and that the length of the crack had shrunk from an initial 360 metres (1,181 feet) to around 160 metres.

Although more powerful than a previous eruption in the same area last year, the initial lava flow of around 32 cubic metres (1,130 cubic feet) per second had decreased by the second day to around 18 cubic metres per second, according to an assessment published late on Thursday.

"This behaviour is very similar to what is usually observed during eruptions in the country -- the eruption is powerful at the beginning and then subsides," the Institute of Earth Sciences said in a statement.

The field of lava from the eruption covered 144,000 square metres on Thursday.

"The (lava) flow is strongest in the middle of (the fissure) and there are indications that it may extend northwards," authorities warned.

The pressure in the tunnel feeding the eruption is not balanced, which geophysicists say could lead to a new eruption at a new location. 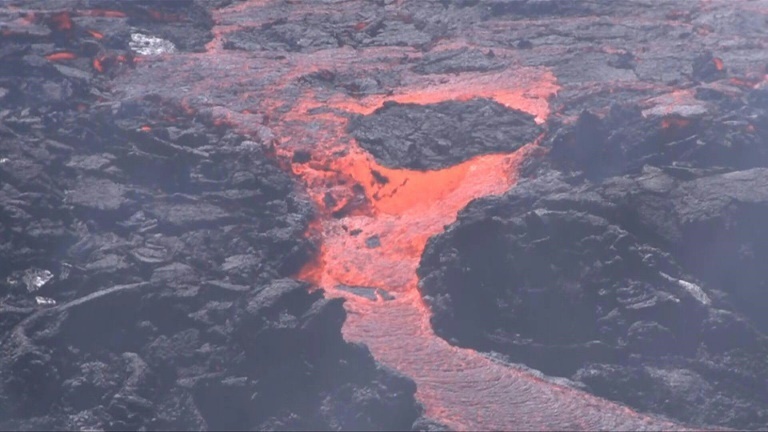 "New fissures can open in the immediate vicinity of the eruption site with little notice," the IMO said.

Visitors have flocked to the eruption in record numbers to marvel at the flow of lava.

According to authorities, more than 4,200 people walked the 14-kilometre round trip to the site on the Reykjanes peninsula in southwest Iceland on Thursday, about two hours from the nearest car park. 'Indescribable': the heat and roar of Iceland's volcano