"It's just words, words," complains Pino D'Aietti, who like many residents of the tiny island of Lampedusa feels abandoned by Italy's politicians -- except when a surge in migrant arrivals makes the headlines.. But there is a sense of disillusionment here, an island of just 6,000 residents out in the middle of the Mediterranean.

"It's just words, words," complains Pino D'Aietti, who like many residents of the tiny island of Lampedusa feels abandoned by Italy's politicians -- except when a surge in migrant arrivals makes the headlines.

The 78-year-old retired plumber is sitting outside a restaurant on the island, where anti-immigration leader Matteo Salvini has spent the past two days as part of his campaign for September 25 elections.

Located between Sicily and Tunisia, Lampedusa is known for its beaches and turquoise waters, but also as the landing point for thousands of migrants on boats from north Africa.

On Thursday, Salvini visited the migrant reception centre where as many as 1,500 mostly young men were packed this week in a facility meant for 350.

The League leader, whose right-wing alliance is expected to form Italy's next government, has made stopping the arrivals a cornerstone of his campaign.

He also listened to locals' concerns about rising inflation, particularly soaring energy costs, which are weighing heavily on the eurozone's third-largest economy.

But there is a sense of disillusionment here, an island of just 6,000 residents out in the middle of the Mediterranean.

"We have the most expensive fuel, the (water) purifier hasn't worked for a long time, there is no hospital," railed D'Aietti, as tourists in swimsuits browsed shops nearby.

"We are spare parts. When the tourists go, the rubbish we eat! It's disgusting. And who defends us?"

The lack of healthcare is a recurrent theme.

"We have specialists and that's it. For anything else we have to go onto the mainland," said Maria Garito, a 58-year-old housewife out shopping.

Mayor Filippo Mannino admits healthcare is a problem, but tells AFP: "The municipality has limited means, it is up to the state to take charge."

He has also called for more help from Rome -- and the European Union -- to manage the inflow of migrants, which often becomes unmanageable in the summer months when calmer seas cause a surge in new arrivals.

Not far from the town hall, at the end of an isolated road, is the so-called hotspot, the immigration reception centre. 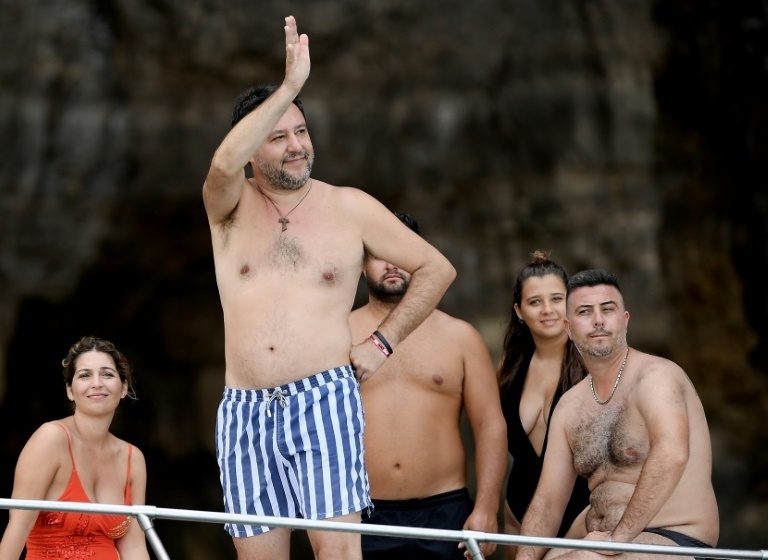 It is protected by steel gates, but those inside can be seen whiling away the hours in a few shady spots.

The government last week agreed to lay on a special ferry to transfer migrants three times a week to Sicily, and AFP reporters this week saw hundreds boarding a boat.

Few get to sample the delights of Lampedusa -- unlike Salvini, who was pictured in his swimsuit in a pleasure boat off the island on Friday.

Although the locals prefer not to talk about the migrants, prejudice is an issue here.

Ibrahima Mbaye, a 43-year-old Senegalese man who arrived here on a French visa three years ago, said "there are good people but half the people are racist, you feel it".

He has been working as a fisherman, but says it has not been easy -- and nor is it for those who arrive illegally.

"They think that Italy is their future, but when they arrive they're disappointed. They understand that it's not easy to earn money," he told AFP. 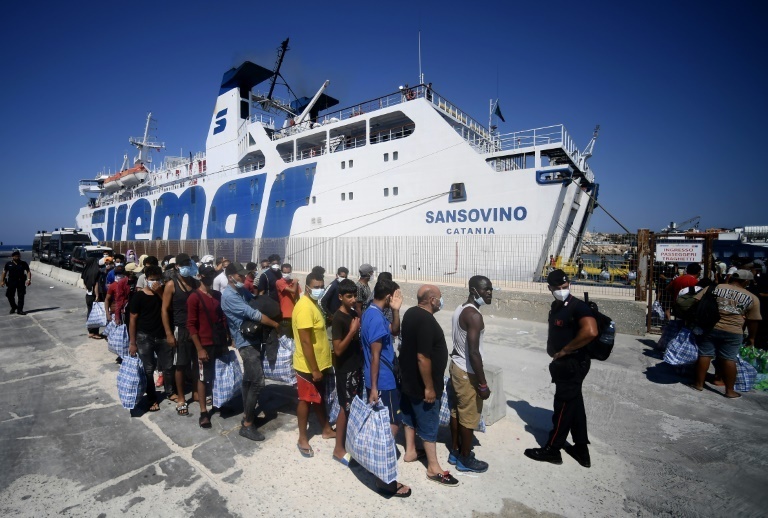 As for the tourists on holiday on Lampedusa, many are either unaware or willing to turn a blind eye.

"We read about it in the newspapers but we really don't feel it," said fifty-something Dino, who has been coming here every summer for ten years.

The two faces of Lampedusa "are two separate things", he adds. 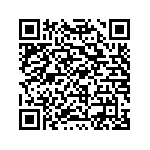