Austrians expressed shock and anger this week over the suicide of doctor who had been the target of a torrent of abuse and threats from anti-vaccination protesters.. She had long been the target of death threats because of her criticism of the widespread anti-lockdown protests of 2021.

Austrians expressed shock and anger this week over the suicide of doctor who had been the target of a torrent of abuse and threats from anti-vaccination protesters.

The bells of Vienna's St. Stephen's Cathedral rang out in memory of Lisa-Maria Kellermayr on Monday, and hundreds of people held a candle vigil outside, after the 36-year-old doctor was found dead at her practice on July 29.

She had long been the target of death threats because of her criticism of the widespread anti-lockdown protests of 2021.

An autopsy later confirmed that Kellermayr had taken her own life.

Austria has found itself deeply polarised over coronavirus restrictions and in particular a government policy -- subsequently dropped -- of making vaccination against the coronavirus compulsory.

Kellermayr -- whose practice was in the region of Upper Austria where immunisation rates are particularly low -- had frequently complained of the menace.

"For more than seven months, we have been receiving... death threats from those opposed to coronavirus measures and vaccinations," she wrote at the time, sharing a message from one internet user who said they would pose as a patient in order to attack her and her staff.

She described how she had "invested more than 100,000 euros" ($102,000) in measures to ensure her patients' safety and was on the brink of bankruptcy.

Then, at the end of June, Kellermayr announced on her professional website that she would not be seeing patients until further notice.

Daniel Landau, who organised a memorial vigil for her in Vienna, said that Kellermayr had become a virtual recluse for several weeks.

"She didn't dare to leave" her office, Landau told AFP.

On Saturday, the head of Austria's doctors' association, Johannes Steinhart, said that while aggressive behaviour towards medical staff was not new, it had been "fired up and noticeably aggravated" by the debate over Covid-19 and vaccines. 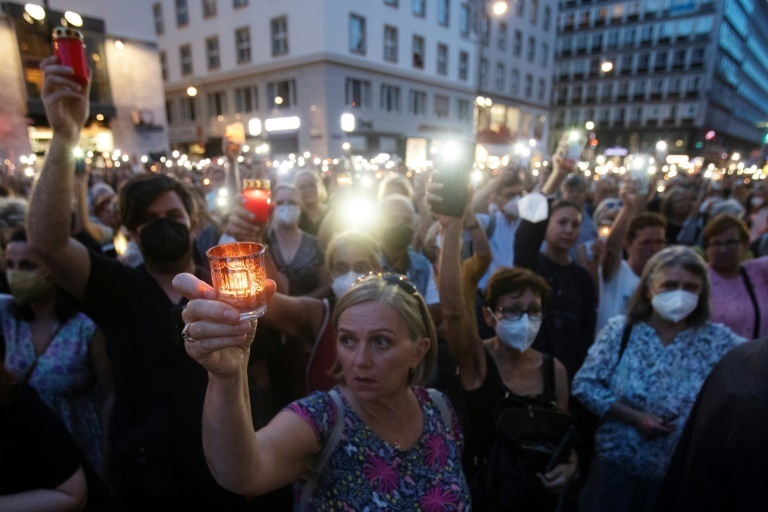 The police, who had previously suggested Kellermayr was exploiting the situation for attention, insist they did everything to protect her.

The local prosecutor's office also rejected suggestions it could have done more.

"As soon as we received the police report (identifying one of the suspects), we sent it over to the relevant authorities in Germany," spokesman Christoph Weber said.

On Friday, prosecutors in the neighbouring German state of Bavaria said a 59-year-old suspect was being investigated by a specialist hate speech unit.

At the beginning of the week, Austrian President Alexander Van der Bellen visited the small town of Seewalchen where Kellermayr lived to lay flowers in her memory.

After news of her death broke, he had appealed to Austrians to "put an end to intimidation and fear".

But on some Telegram groups, the hateful messages continue.

"Some people are celebrating her death; others believe the vaccine killed her," said Ingrid Brodnig, a journalist and author who investigates online disinformation.

"Stricts laws exist" already against online hate, but not enough is done to implement them, Brodnig said.

One government minister has floated the idea of a separate prosecutor's office to target such cases.

Doctors and researchers have also been targeted elsewhere.

French infectious disease specialist, Karine Lacombe, described how she had been vilified for her work as part of a collective of doctors combatting coronavirus-related disinformation.

She, too, complained that the response from the authorities in the face of threats was not robust enough, and has scaled down her public appearances this year.

"You end up thinking that the risk isn't worth it," she told AFP.

"In that sense (the aggressors) have won, they are gagging us," she said.