Climate deniers use past heat records to sow doubt online

With Europe gripped by successive heatwaves, climate-change deniers are spreading scepticism by publishing data on social media on extreme temperatures allegedly recorded decades ago to imply scientists are exaggerating global warming.. - 'Not change trend' - Climate scientists overwhelmingly agree that carbon emissions from humans burning fossil fuels are heating the planet, raising the risk, length and severity of heatwaves and other extreme weather events.

But experts say the figures cited from the past are often incorrect or taken out of context -- and even if accurate do not change the fact that heatwaves are becoming more frequent and intense.

The posts typically include heat records from almanacs or newspaper reports from the past, arguing that they are similar to the record highs set during this year's heatwaves in Europe.

One post that has gone viral on Facebook includes a screen grab of a brief article published in the New York Times on June 23, 1935, which said the mercury had hit 127 degrees Fahrenheit (52.7 degrees Celsius) in Zaragoza, in northeastern Spain, the day before.

That temperature is much higher than the record for the highest temperature in Spain of 47.6 degrees Celsius recorded on August 14, 2021 by national weather office Aemet at the La Rambla meteorological station in the southern province of Cordoba.

"The figure of over 52 degrees in incorrect. It is not a figure that is in our climate database, and in fact, there is no log of a temperature above 50 degrees Celsius," he said.

And "even if the figure was correct, which I stress it is not, that is not proof that climate changes does not exist", he added.

Spanish daily newspaper La Vanguardia in 1935 also reported that temperatures had hit the low 50s in Zaragoza but explained that the measurement was taken "in the sun".

Scientists recommend a series of strict criteria to ensure an accurate temperature reading. 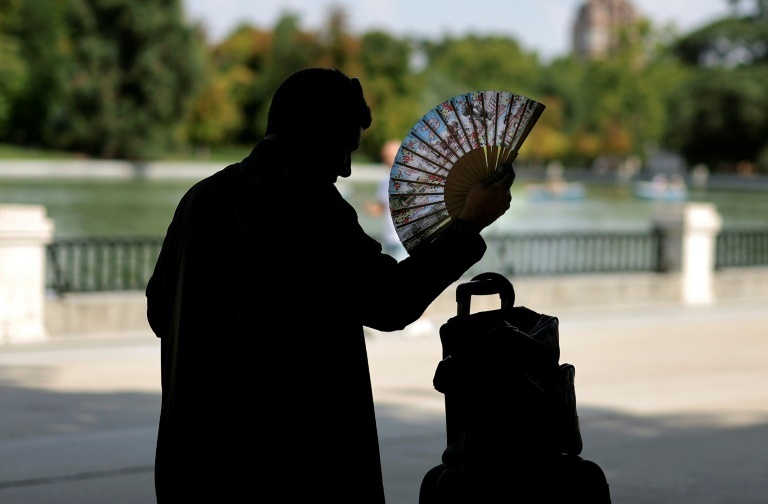 "Sensors must be protected from the sun and the rain, and the temperature inside the weather station must be the same as what it is outside," said Aemet meteorologists Ricardo Torrijo.

Another post that has gone viral on Facebook, Telegram and Twitter since last June shows a front page of Spanish weekly magazine El Espanol from August 1957 with the headline: "The hottest summer of the century".

It referred to a reading of a temperature of 50 degrees Celsius in central Spain, which was also taken in the sun.

Isabel Cacho, a climate expert at the University of Barcelona, said that "in the hypothetical case" that the mercury soared above 50 degrees Celsius, "this would not be an argument to question that it is warmer now".

Climate scientists overwhelmingly agree that carbon emissions from humans burning fossil fuels are heating the planet, raising the risk, length and severity of heatwaves and other extreme weather events.

"These figures of high temperatures (in the past) do not discredit the existence of climate change," said Jose Luis Garcia, a climate change expert at Greenpeace in Spain.

"They are unrelated. One thing is one-off temperature data and another very different thing is the tendency towards an increase in the average temperature."

Pedro Zorrilla, a Spanish expert in climate change, said the "anomaly" of a very high temperature recorded in 1935 would have a "very small effect" on average temperatures.

"It does not change the trend," he added.

Records show heatwaves are occurring with greater frequency in the Iberian Peninsula, said Mariano Barriendos, a geography and history professor at the University of Barcelona.

"It is relatively usual for a hot air mass to enter the peninsula from the Sahara Desert. What is worrying is that heatwaves are happening more often," he said.