Farming under fire on the frontlines in eastern Ukraine

The combine harvester lies crippled in a field of eastern Ukraine, surrounded by a blackened patch of cropland.. "No one wants to go there to harvest, because everyone is afraid of incoming missiles."

The combine harvester lies crippled in a field of eastern Ukraine, surrounded by a blackened patch of cropland.

The machine was lumbering through a pasture outside the village of Maidan -- around 20 kilometres (12 miles) from the frontline with Russian forces -- when it struck a mine, according to farmer Pavlo Kudimov.

One front wheel was wrenched off and the giant rotating reel prised aside, as the cabin was scorched by flames.

The next morning the driver remained in hospital suffering serious burns as the wreck still smouldered, a reminder of the risks of tending land in a breadbasket that has become a brutal war zone.

"Farming has always been hard, but it's even harder now," Kudimov told AFP.

At the start of August, the first shipment of grain left Ukraine since Russia launched its large-scale invasion and blockaded Kyiv's ports on the southern Black Sea.

Ukraine accounts for 10 percent of the world wheat market and the boat left under a deal brokered by Turkey and the United Nations, eager to assuage a global food price crisis hammering poor nations.

Inside Ukraine, the embargo on grain exports has created a crisis for farmers.

With no access to international markets, silos are full, prices have dived and the supply chain logjam has yet to ease up.

Farmers in Donbas -- the eastern region where the war with Russia shifted after the Kremlin gambit to capture Kyiv failed -- are facing threats on two fronts.

Comprising the regions of Donetsk and Lugansk, Donbas is the industrial and farming heartland of Ukraine. 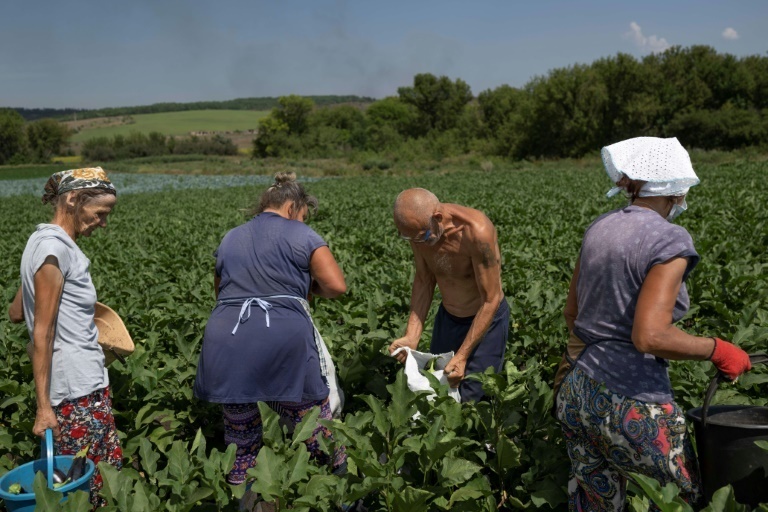 Last year, farmer Sergey Lubarskyi was paid up to 8 hryvnia ($0.22) for each kilo of wheat.

Since the blockade, he can now fetch just 3 hryvnia -- if he can transport it to the regional hub of Kramatorsk.

In the frontline village of Rai-Aleksandrovka, he can only fetch 1.80 hyrvnia.

"Drivers are afraid to come here," he says.

Eduard Stukalo, 46, farms 150 hectares on the outskirts of the city of Sloviansk.

Some 30 hectares of wheat have "completely burned down" -- he suspects from artillery fire.

It is a struggle to convince workers to collect the crop that remains near the frontlines.

"Farmers like us will go bankrupt this year," he says. "No one wants to go there to harvest, because everyone is afraid of incoming missiles."

"We were risking our lives also when we sowed the fields in April and May this year," he added.

But some are driven by wartime austerity to work the land, despite the risks.

"We go to work in the fields, because there is no other employment here," said 57-year-old Svitlana Gaponova, plucking aubergines in a field outside the besieged settlement of Soledar.

"It's scary, but it's distracting," she said as the sound of munition blasts rolled across the horizon.

In this impoverished portion of Ukraine, there is also a strong tradition of subsistence farming.

At the Sunday market, stallholders sell the meagre produce they can nurture in their personal plots.

"We constantly explain to people what is happening around, and try to motivate them to evacuate to safer cities."

Though these plots do not weigh on the scales of global trade and politics, they are not exempt from the perils of wartime.

In the early hours last Monday morning, incoming fire cratered the space behind 57-year-old Lyubov Kanisheva's modest cottage on the outskirts of Kramatorsk.

Next door more than a dozen beehives were shattered and upended. Now the swarming hum of bees merges with the hounding air raid siren.

In Kanisheva's plot, grape vines have been caked in dust and tomatoes smashed into the earth.

"The garden was just for our needs, but we managed to grow a lot," she said.

"There is nothing of it left."