Russia said Tuesday that massive explosions at a military facility on the Kremlin-controlled Crimean peninsula in Ukraine that also damaged electrical power infrastructure were the result of "sabotage". . "As a result of an act of sabotage, a military storage facility near the village of Dzhankoi was damaged," the defence ministry said in a statement carried by Russian news agencies.

Russia said Tuesday that massive explosions at a military facility on the Kremlin-controlled Crimean peninsula in Ukraine that also damaged electrical power infrastructure were the result of "sabotage".

Russian President Vladimir Putin meanwhile said the United States was trying to drag out the conflict, accusing Washington of putting Ukrainians in the firing line and supplying Kyiv with heavy weapons.

Huge fireballs erupted at the site in Crimea early on Tuesday where ammunition was temporarily being stored and clouds of black smoke billowed into the air, images posted on social media showed.

"As a result of an act of sabotage, a military storage facility near the village of Dzhankoi was damaged," the defence ministry said in a statement carried by Russian news agencies.

The blasts -- caused by a fire that led ammunition to detonate -- damaged civilian infrastructure, "including power lines, a power plant, a railway track" and residential buildings, the ministry said.

The explosions come one week after at least one person was killed and several more were wounded in similar explosions at a Russian military airbase in Crimea.

Ukraine has not directly claimed responsibility for either of the incidents in Crimea, but senior officials and the military have implied Ukrainian involvement.

"What is stolen does not bring prosperity," Podolyak said on Ukrainian television. 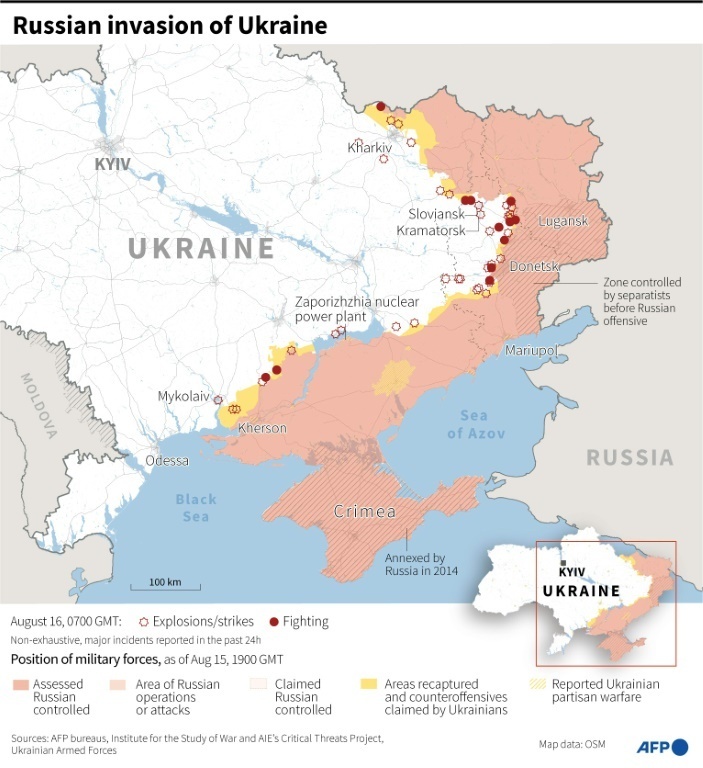 He earlier described the blasts as "demilitarisation in action" -- using the same term used by Russia to justify its invasion of Ukraine.

Kyiv and Moscow have traded accusations over a series of strikes this month on the Zaporizhzhia nuclear plant in southern Ukraine -- Europe's largest.

Ukrainian President Volodymyr Zelensky warned Monday that a "catastrophe" at the Russian-controlled facility would threaten the whole of Europe.

Russia annexed Crimea from Ukraine in 2014 and has used the Black Sea region as a staging ground for its invasion.

Moscow ordered the invasion of Ukraine in February, anticipating little military resistance and hoping for a lightning takeover that would topple the government in Kyiv within hours.

But after failing to capture the capital, Russia's military instead has become entrenched in a protracted bout of attrition with the sprawling front line in the east and south.

"The situation in Ukraine shows that the US is trying to prolong this conflict," Putin said Tuesday, addressing the opening ceremony of a security conference in Moscow.

Washington is "using the people of Ukraine as cannon fodder", he said, lashing out at the United States for supplying weapons to Kyiv.

The US has provided key economic and military backing to Kyiv, in particular supplying long-range, precision artillery that has allowed Ukraine to strike Russian supply facilities deep inside Moscow-controlled territory.

Meanwhile, in the eastern Donbas region, which has seen most of the fighting, Ukraine said Russia had launched a "massive" offensive from an oil refinery in the recently captured city of Lysychansk in Lugansk province.

Ukraine's presidency said one woman was killed and two more injured in Donetsk province, which together with Lugansk makes up the industrial Donbas that is now mostly controlled by Russian forces. 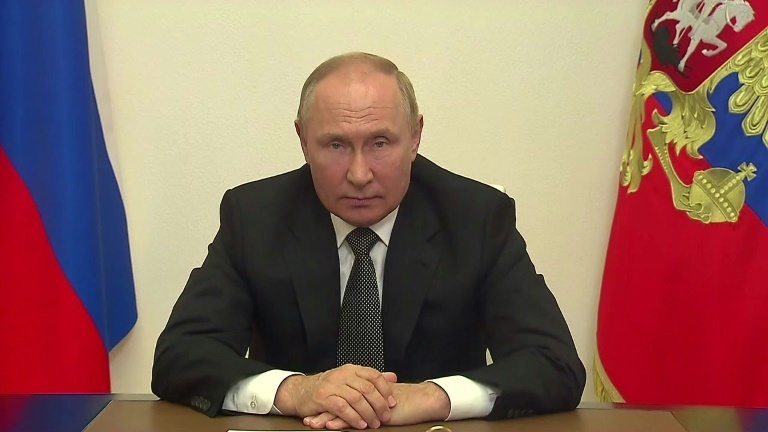 The first UN-chartered vessel laden with grain meanwhile left Ukraine for Africa following a hallmark deal brokered by Turkey and the UN to relieve a global food crisis.

The UN-chartered vessel departed on Tuesday from the Ukrainian port of Pivdennyi and will sail to Djibouti "for delivery to Ethiopia", Ukraine's infrastructure ministry said.

The MV Brave Commander, carrying 23,000 tonnes of wheat, was able to leave after a deal agreed last month lifted a Russian blockade of Ukraine's ports and established safe corridors through the naval mines laid by Kyiv.

Ukraine has said it is hoping two or three similar shipments will follow soon.

Russia's invasion has driven an economic, political and cultural wedge between Moscow and European capitals.

The prime minister of Estonia, which was formerly Soviet-ruled, said on Tuesday her government had decided to remove all Soviet-era monuments from public spaces in the country.

"As symbols of repressions and Soviet occupation, they have become a source of increasing social tensions –- at these times, we must keep the risk to public order at a minimum," Kaja Kallas wrote on Twitter. 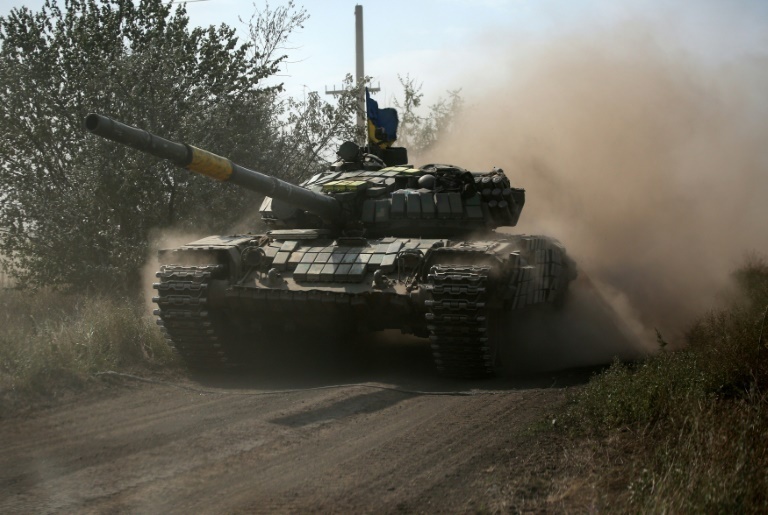 The move follows similar trends in Poland and Ukraine, which began tearing down statues of Soviet leaders in earnest after Russia-backed separatists wrested control of swathes of the east in 2014.

Finland, meanwhile, announced plans to limit Russian tourist visas to 10 percent of current volumes beginning in September, due to rising discontent over Russian tourism amid the war in Ukraine.