France's record heat and drought have not spared the majestic pastures under the snow-capped Alps, where cows are struggling to find enough grass to produce milk for reblochon and other prized cheeses.. Crowds of tourists in search of cooler climes have flocked to the Alps this summer where buying local raw-milk reblochon and other hand-made cheeses directly from local producers is a cherished ritual.

France's record heat and drought have not spared the majestic pastures under the snow-capped Alps, where cows are struggling to find enough grass to produce milk for reblochon and other prized cheeses.

"Everything's yellow and parched, so we'll have to bring them down from the pastures a month early," said Theo Bargetzy, 28, as cowbells rang out in a field some 1,600 metres (5,250 feet) above sea level.

Crowds of tourists in search of cooler climes have flocked to the Alps this summer where buying local raw-milk reblochon and other hand-made cheeses directly from local producers is a cherished ritual.

But this year, some heading to Bargetzy's Lorettes farm perched above La Clusaz are coming away empty-handed -- cows are not getting their usual fill of fresh grass, and their milk is less rich as a result.

July was the driest month on record for France overall since 1961, and heat waves pushed temperatures near La Clusaz above 30 degrees Celsius (86 Fahrenheit) on several days, unheard-of on the steep slopes. 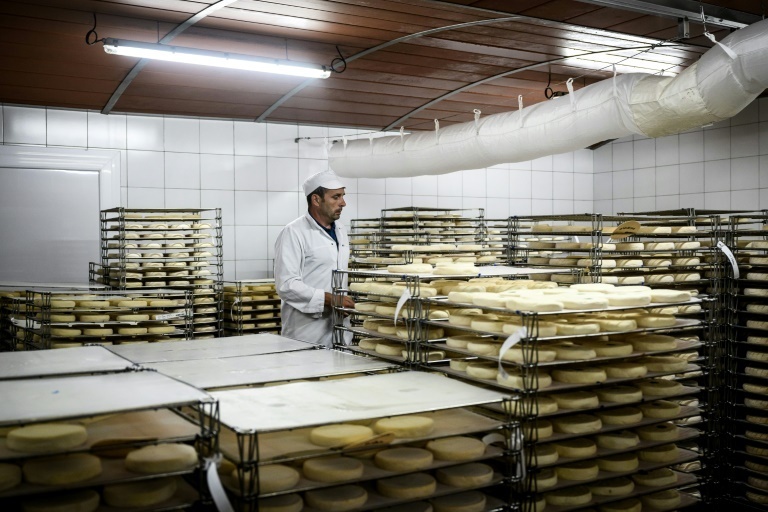 "We're losing one reblochon per cow per day, so in a week that's 300 fewer cheeses," Bargetzy says later, while molding fresh curds into discs that will be carefully aged on wooden planks in a cellar until the distinctive orange-gold rind forms.

It takes four litres of milk (just over a gallon) to make each cheese that weighs some 450 grammes (just under a pound) -- within the guidelines set by the National Institute of Origin and Quality (INAO), the guardian of France's strict food and wine appellations.

"The worst thing is that this is when we have lots of tourists wanting to buy, and we don't have enough for everyone -- we run out, and can't sell to all the people coming to visit," he said.

Dozens of farmers have already dipped into their winter feed stocks, but overall dairy production in the region is down 15 percent from last year's levels, according to the AFTAlp cheese producers' association.

"The situation is difficult -- we've had droughts in the past but this is going on everywhere in France, Italy and elsewhere in Europe," said the association's president Jean-Luc Duclos.

Duclos and his family manage a farm with more than 200 cows for making emmental as well as meat near Frangy, with an app-controlled milking system that would astonish his grandfather, who had "four cows and four hectares to feed 11 children."

He worries that rising costs of feed, gas and electricity since the outbreak of the Ukraine war will create a vicious circle of price speculation and hoarding that could hurt farmers for months to come.

"We've already had to raise the prices of our Savoy products... but I think we'll have to raise them again, by around five to eight percent, to cover the impact of this drought," he said.

What for generations was subsistence farming has become a thriving Alps industry, though most operations are still family affairs that rely on both local and national networks to distribute their stocks.

Felix Gallet, 46, plays a key role as technical director of the reblochon cooperative in nearby Thones, ensuring the strict hygiene protocols required to sell raw-milk cheeses many countries do not allow because of bacterial risks.

"Our output is down around four or five percent. It's not a complete catastrophe because some farms are higher up, and temperatures were a little lower than in the valleys," Gallet said.

"But it's true that it's going to have an impact on our volumes, we're hoping to recover this winter but it's going to be hard to make up for what we've already lost," he said.

Gallet also warned that in response, producers can increase prices only so much.

"It's hard to go much higher, even for high-quality cheese. You have to bear in mind what consumers can pay," he said. France to conduct biggest ever war games in 2023