As aid organisations mobilise to provide relief for victims of Pakistan's catastrophic floods, one group of women is focused on a necessity that is frequently taboo in the conservative Islamic nation -- menstrual hygiene products.. For many flood victims who have fled their homes for makeshift camps, women are mixing with men who are not their relatives for the first time.

As aid organisations mobilise to provide relief for victims of Pakistan's catastrophic floods, one group of women is focused on a necessity that is frequently taboo in the conservative Islamic nation -- menstrual hygiene products.

Over 30 million people have been affected by floods that cover a third of the country following record monsoon rains, with hundreds of thousands made homeless.

Half of the victims are women and girls.

"Periods do not stop during floods. Women need this assistance," said Bushra Mahnoor, a university student in eastern Lahore who founded the Mahwari Justice campaign to provide help.

Mahnoor recalled her experience with floods that hit Pakistan in 2010 when she saw a young girl with period stains on her clothes.

She learned that women "were using leaves" to manage their periods, so decided to take action. 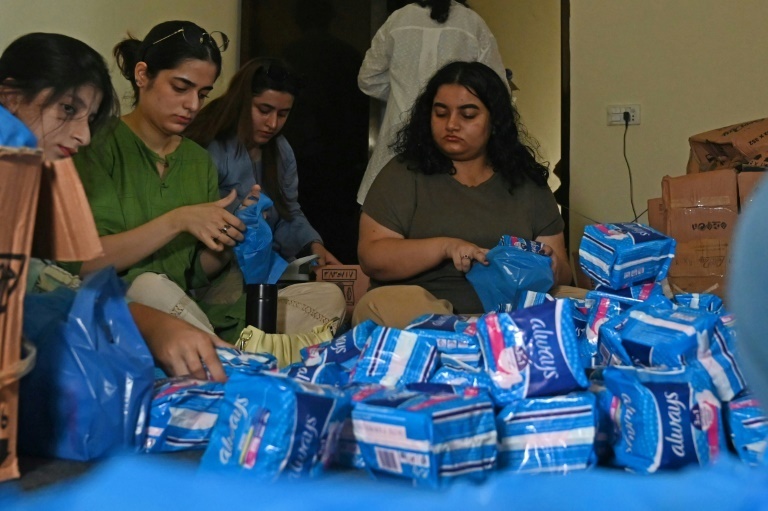 Each kit costs just 200 rupees ($0.90), but can make an enormous difference for women trying to retain their dignity in desperate times.

Calls to the manufacturers of period products went unanswered, so Mahnoor haggles with wholesalers in Lahore's bazaars to get the lowest possible rates for the kits.

Mahwari -- which means "period" in Urdu -- has already sent thousands of kits to some of the worst-hit areas, but their reach is set to get even bigger.

After a social media appeal, dozens of girls and women volunteered to help pack the kits.

"I put myself in their place and thought this would have been such a huge problem for me if I didn't have these things," said volunteer Nyle Imtiaz, describing her motivation.

Similar meet-ups are happening in other cities -- including Multan, where the transgender community has taken the lead in the local effort.

Mahnoor says she met resistance when she first spoke to men about the kind of specialised help she wanted her group to provide and asked for help in distribution.

"Menstruation is a big taboo in Pakistan and it was not easy," she said.

Much of Pakistani society operates under a strict code of honour and speaking openly about women's issues such as menstruation and sexual health is rare.

The reach of the floods includes Khyber Pakhtunkhwa province -- the most conservative part of Pakistan, where women are rarely seen in public and often wear the all-covering burqa or shawls.

For many flood victims who have fled their homes for makeshift camps, women are mixing with men who are not their relatives for the first time. The camps have no showers and only a few shared toilets.

On social media, the campaign has been accused of pursuing a "liberal agenda", taking away funds from more worthwhile causes such as food and medicine.

"I don't understand what is there to hide, and what's there to be ashamed of," said Nimra Akram, another Lahore volunteer.

"It would be more shameful in my opinion to see a girl who has her period and doesn't have this kit."

Mahnoor said even her own family has tried to stop her from being so public.

"My mother tells me I'm being such a shameless woman for even talking about menstruation so openly," she said. After the floods, a wave of disease plagues Pakistan