A sudden gale drowns out the crunching sound of footsteps on the ice and makes skirts billow in the freezing night.. - 'Flying between clouds' - In the dark of night, all that is visible is an ant-like line of lanterns lighting up the ice on either side.

A sudden gale drowns out the crunching sound of footsteps on the ice and makes skirts billow in the freezing night.

Ten indigenous Aymara women slowly trek up a Bolivian mountainside in their traditional dress as a statement of their emancipation.

The Climbing Cholitas of Bolivia Warmis is a group dedicated to campaigning for the rights of Indigenous women through mountaineering.

Cecilia Llusco, 36, is the daughter of a mountain guide and dreamt since she was young of climbing the snow-capped Huayna Potosi that rises over 6,000 meters above sea level.

However, for many years she limited herself to cooking for other mountaineers and packing their backpacks.

That was until she and several other rural women, including some of her sisters, decided to change their destiny.

"Why can't we climb mountains?" she said they asked themselves, while drawing dismissive reactions from some men.

"What are these women doing here, on the mountain?" Llusco recalls them saying.

Seven years after their initial expedition, and after climbing nearly a dozen peaks in Bolivia, Peru and Argentina, the Cholita Climbers, named after indigenous Bolivian women called "cholas" or "cholitas," are tackling Huayna Potosi again on this austral winter night.

And they did not compromise on their style.

"We wanted to show that women are strong and brave, that we can do it with our clothing," said LLusco, who wears her hair in long braids decorated with brown wool.

Whenever they can, and often helped by funding from NGOs and private businesses, they hire a minivan to drive two hours from their homes in El Alto -- the satellite overlooking La Paz, to the wall of ice they plan to scale. 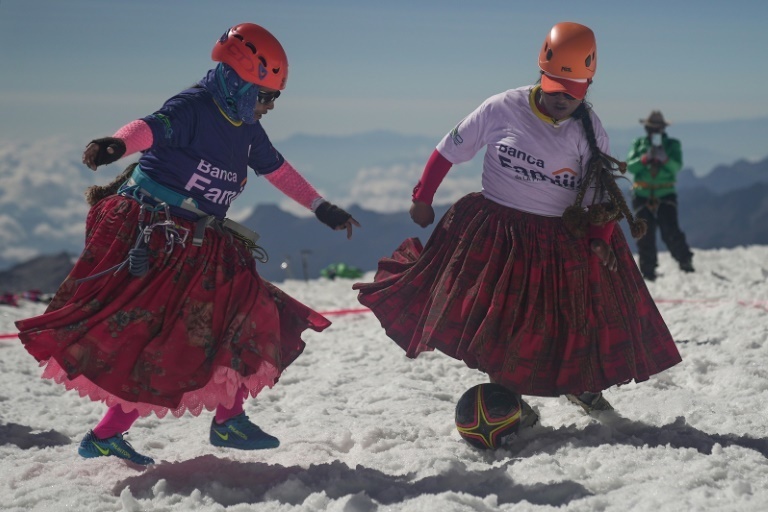 There are 14 members and every time they climb they share an 'aptapi' -- a banquet in which every person brings some food to share.

After resting for a couple of hours in a refuge, the Cholitas get up at 11:00 pm and start dressing in their traditional colored pleated skirts, called polleras.

A ragbag of home-makers, carriers and tourist guides, they start climbing the glacier at midnight so as to reach the summit at sunrise.

But instead of a backpack, they carry their equipment in a traditional cloth sack slung over their shoulders and tied around the neck.

"There has been a lot of discrimination against the pollera woman," said Llusco, pointing to the femicide rate in Bolivia being the highest in South America, according to international organizations.

Indigenous people, who make up almost half of Bolivia's population, have long been marginalized.

In the dark of night, all that is visible is an ant-like line of lanterns lighting up the ice on either side. 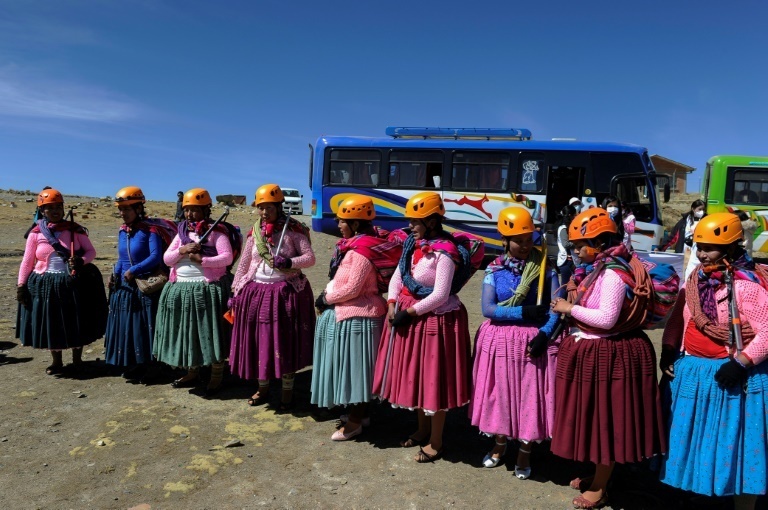 One by one the Cholitas cling to a safety harness and carefully dig their crampons into the ice to avoid tumbling 30 meters into an abyss.

The oxygen levels drop and temperatures plunge to minus 10 degrees Celsius.

In the distance, 30 kilometers way, the lights of El Alto are visible.

With the first light of the day, the coppery faces of these women -- aged between 18 and 42 -- become visible.

As a couple of snowy peaks poke through the low-lying cloud, several Cholitas stop to take photos of the dawn sun poking out from spectacular landscapes with their mobile phones.

The extreme altitude brings on head and stomach aches which the Cholitas try to alleviate by chewing coca and chocolate leaves.

Close to the summit, two exhausted climbers decide they have had enough and abandon.

The final path is steep and narrow. Clinging to a rope they push on slowly.

At the top it is all smiles, hugs and dancing.

"When we reach the mountain peak it is as if we were flying between clouds," said Llusco.

Her daughter Camila Tarqui, a new recruit, says she likes "how the pollera flutters" at this altitude.

"You're almost able to touch a star when you come up here at night," she said.

On a plain a few meters below the summit, the Cholitas play a football match. 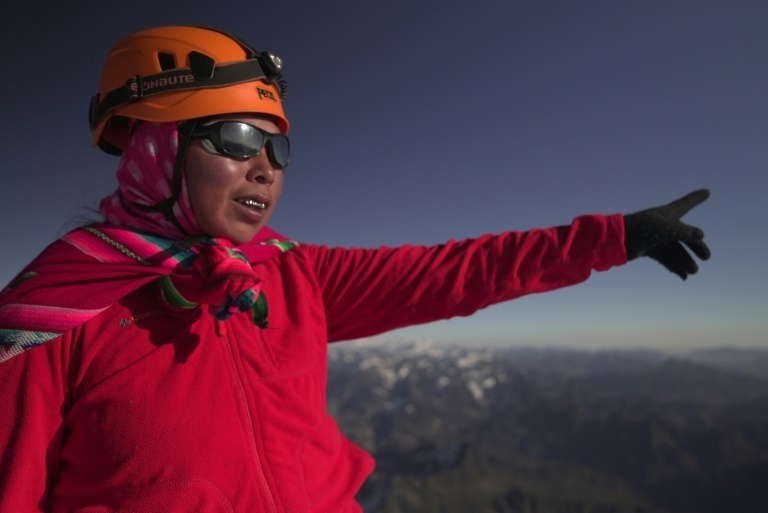 High altitude football is nothing new in Bolivia, whose national team plays its matches in La Paz on the highest pitch in the world used for international matches.

Having already scaled South America's highest peak in 2019 -- the Aconcagua in Argentina -- the Cholitas now dream of tackling Mount Everest.

"We women have broken down several barriers ... and we want to go further, always carrying high the Aymara culture," said Llusco. Clashes erupt in Bolivia capital between police and coca farmers