Decent salaries and stability are the hallmarks of a job in Iraq's civil service, an institution much coveted by young graduates, even as it starves the private sector and hobbles the economy.. Unlike in the civil service, youngsters"can negotiate their salary", he says, expressing guarded optimism for the future. gde/tgg/hc/it

Decent salaries and stability are the hallmarks of a job in Iraq's civil service, an institution much coveted by young graduates, even as it starves the private sector and hobbles the economy.

The patronage systems that feed the public sector in the oil-rich but war-battered nation are so entrenched that even the outgoing finance minister has despaired of ever trimming them down to size.

It's a refrain that fresh graduates chant each year on the streets of the southern city of Nassiriyah.

Maitham Mohammed Redha, 32, is among them. Public sector jobs are "our legitimate right", he says, adding that he has personally lobbied the provincial governor for work because he doesn't have "wasta", or an inside connection.

His situation is mirrored across Iraq, a country of 42 million in which four out of 10 young people are unemployed and where the state is by far the biggest employer.

Propped up by oil production, which accounts for 90 percent of national revenues, young Iraqis view public sector jobs as a refuge against the political winds and insecurity that perpetually batter businesses.

The lure is such that the private sector is robbed of bright young talent, as the smartest tend to opt for a largely unproductive easy ride in government service.

"Graduates, if they start working in the private sector, consider it a temporary job until they can find an opportunity in the public sector," said Maha Kattaa, Iraq country coordinator for the International Labour Organization.

"The private sector feels it cannot compete with the advantages, benefits provided by the public sector," she added.

Mohammed al-Obeidi, who has worked for nearly two decades at a ministry, acknowledges that "the salaries are good".

"Some ministries have good benefits" and the option to retire at 60 -- or even as young as 55 -- provides scope for early retirees to take on private sector work while also drawing their pension. 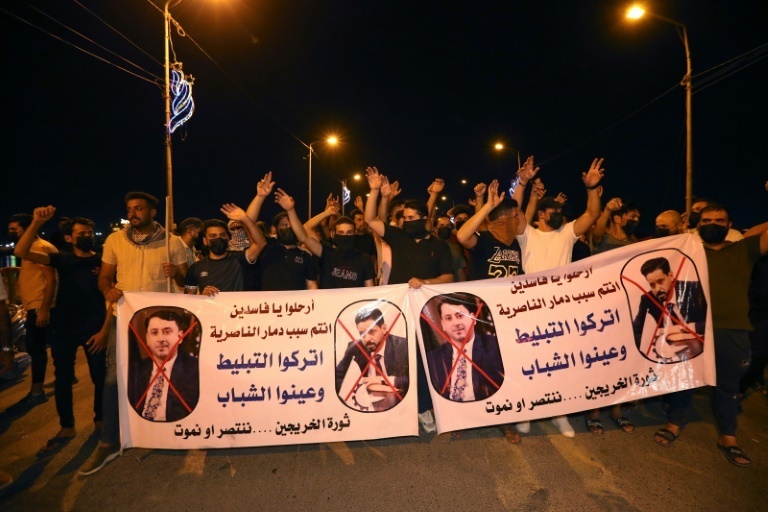 He noted last summer that "previous governments have... inflated public sector jobs in a vain populism that has exhausted the Iraqi economy".

Between 2004 -- the year after a US-led invasion toppled longtime dictator Saddam Hussein -- and 2019, the number of civil service posts quadrupled, he said.

The public sector wage bill alone accounts for two-thirds of the state budget, he said, while Kattaa estimated the government employs nearly 40 percent of Iraq's population of working age.

Such numbers are "among the highest... in the world", she told AFP.

Kadhemi has acknowledged the urgency for reform, but equally that he does not have a "free hand" to enact it.

His survival as head of government always depended on bargaining over patronage opportunities by the country's main Shiite factions.

In the public sector, and even in private firms, recruitment is often driven by the allocation of tribal and political favours.

Even the country's finance minister professes to have given up in despair.

"Nearly everything conspires to thwart real change and (instead conspires) to cement... rotten practices," Ali Allawi lamented, in a letter read out to the cabinet when he resigned in August.

Placing the blame squarely on the "cancer" of corruption, Allawi contends that the state has been unable to "break free from the control of political parties and outside interest groups".

One bright spot is that the oil price boom of the last year has driven national output higher -- the IMF predicts Iraq's economy will grow 10 percent this year.

Entrepreneurs are seeking to capitalise on this, among them Maitham Saad, 41.

Three years ago, he set up a company that sells dates from southern Iraq to international markets.

It now employs about 30 people, despite struggling to recruit, especially young people.

"Once they are employed in the private sector, if their boss is decent, they are happy," he says.

Unlike in the civil service, youngsters "can negotiate their salary", he says, expressing guarded optimism for the future. A year on, Iran's Raisi faces economy in trouble